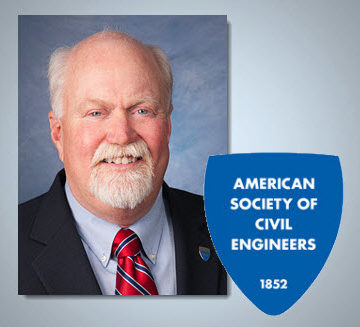 Mark W. Woodson, P.E., L.S., D.WRE, F.ASCE, president and owner of  Woodson Engineering & Surveying, Inc., of Flagstaff, Arizona, which he founded in 1994, has been elected ASCE’s new president-elect by its members. Woodson, whose 43-year involvement with the Society began as a student at the University of Arizona, has served as ASCE’s treasurer (2007-2009), director for District 11/Region 8 (2003-2006), and chair of the State Public Affairs Grants Committee (2005-2006), and of the Strategic Planning Committee (2009-2012). Presently, Woodson sits on ASCE’s Transportation and Development Institute (T&DI) Board of Governors, the Engineers Without Borders-USA board of directors and the American Association of Engineering Societies board of directors.

I am truly humbled and honored,” said Woodson upon his election. “I never envisioned this in my life. I do want to thank everyone for their support and friendship over the years and I look forward to working with all of the members of ASCE in the coming years. I especially want to say thank you to my family, coworkers, colleagues, and friends who have supported me all of these years and continue to do so.”

Reflecting on the future of the Society, Woodson listed membership value and the growth of international membership as 2 of ASCE’s biggest challenges to address in the years ahead.

“ASCE has three strategic initiatives – sustainability, infrastructure, and Raise the Bar – which first and foremost are very important to the future of the civil engineering profession,” says Woodson, who will officially be sworn in as president-elect at ASCE’s Global Engineering Conference 2014, in Panama City, Panama, October 7-11. “But to me personally, I have always wanted to answer the question the member or potential member asks, ‘What do I get for my dues?’ It is important for me to be able to better define what exactly the value of the Society is to an individual member.”

Focusing on international growth, Woodson says, “ASCE has a tremendous brand. While it is the American Society of Civil Engineers, our international colleagues have been very proud to be associated with or have membership in ASCE, and I think that is something that will not only continue to grow but something that we need to be willing to let grow.

“This year we will have our annual conference in Panama and that is just one more way to reach out to our international community of civil engineers.”

Woodson noted that one of the things which will make his term in office exciting for members is the new technology ASCE has invested in.

“ASCE has spent quite a bit of money working on its webpage redesign, making it more adaptable to the latest technology, such as tablets, apps, and smartphones,” says Woodson. “That will be an ongoing effort that ASCE is doing and it’s going to benefit not only the present generation of ASCE members but future members as well.”

It’s a Big Part of Our Life

To say that ASCE and the civil engineering profession have been a big part of Woodson’s life would be an understatement. His father was an engineer working in the City of Phoenix Civil Engineering Department. And, as a member of the U.S. Bureau of Public Roads, he worked on the construction of the Pan American Highway in Costa Rica in the 1940s.

Born in Madison, Wisconsin, Woodson has been a resident of Arizona for over 50 years. Woodson obtained both his bachelor’s degree in civil engineering and his master’s degree in business administration from the University of Arizona. Prior to founding Woodson Engineering & Surveying, Inc., he was employed as city engineer for the City of Flagstaff, Arizona (1985-1993), and also served as adjunct faculty at Northern Arizona University (1992-1995).

“Like many of us, my ASCE involvement started in college,” recalled Woodson. “With the Student Chapters you become aware of ASCE. Shortly after I graduated from college I was asked to get involved in ASCE at the Branch level. My boss asked if I would like to serve on the Branch board, and I did that.”

When Woodson married his college sweetheart, Lupe, he later joked, “My wife says she should have included a line about ASCE in our wedding vows. She has participated in ASCE and raised our four children knowing the schedule of different ASCE events and conferences [that] were held locally in Arizona. And then later in life, [she got] involved with me at the national level and in traveling to events.”

The Woodsons’ eldest son, John, is a structural engineer and ASCE member working in Tucson.

“It is a big part of our life,” laughed Woodson. “John is a licensed structural engineer and so [Lupe] says, ‘I not only married an ASCE member but I gave birth to one, too.’”

Friends All Over the World

“ASCE has allowed me to make friends all over the world,” Woodson wrote in his vision statement. “I’ve had the pleasure of serving at the Branch, Section, and national levels [of ASCE], at the technical level on the T&DI board, and as chair of Strategic Planning, working to keep ASCE’s primary strategies front-and-center while keeping important new initiatives on our radar. I’ve become a better engineer and leader because of my involvement with this incredible group of leaders, and now I’m ready to step up and lead ASCE as president-elect during this transformative time in our organization’s history.

“There are three primary strategies we must continue to pursue going forward in order to sustain and expand ASCE’s impact across the globe. We must raise the bar for our profession; ensure our global infrastructure keeps pace with growth; and focus not only on the sustainability of our infrastructure, but [on] the resiliency of it, too.”

Complete biographical information on Woodson is available at ASCE’s website, including his complete vision statement, video interview, and LinkedIn and Facebook links.

Aside from president-elect there were elections for several other national offices. The ASCE national officers elected will begin their terms of office at the business meeting to be held in conjunction with ASCE’s Global Engineering Conference 2014, in Panama City, Panama, October 7-11.

The Tellers Committee convened on Friday, August 15, in the Presidents Room at ASCE headquarters, in Reston, Virginia, to review and validate the results of the 2014 national election for the positions of president-elect, director, at-large director, and region directors and governors. Below are the results of the election and links to the newly elected officers’ biographical information: