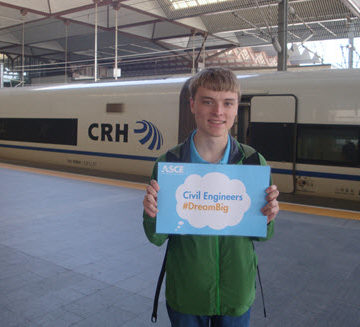 Nathan Shellhamer ‘dreams big’ in front of a bullet train.

Forgive Nathan Shellhamer if he’s a little groggy this week.

The senior civil engineering student at Purdue University returned Sunday, May 22, from his ASCE Dream Big contest trip to Shanghai, China, with just enough time for a few hours of sleep before starting his summer internship in South Bend, IN, with the state’s Department of Transportation.

Shellhamer, S.M.ASCE, won the “dream” prize of a trip for two to China, where scenes for Dream Big: Engineering Wonders of the World were being shot. The ASCE giant-screen movie, produced by MacGillivray Freeman Films with Bechtel Corporation as a presenting sponsor, is in production for release in 2017. He was accompanied by his girlfriend, Monica.

Shellhamer shared his adventures with members in a five-part travelogue for ASCE News, including photos and a video from Shanghai’s maglev train. However, since that couldn’t capture it all, ASCE News talked with him about the Shanghai experience, the film shoot, and more. Overcoming some jet lag, here’s what he had to say. 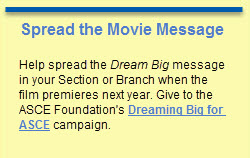 On going behind the scenes of Dream Big …

Meeting with the film crew, I honestly didn’t know what to expect. They’re obviously going to be working with cameras and the like. [Producer] Marc [Ostrick] had sent us to this hotel that overlooked the Shanghai Tower from across the river. So we were there before the film crew. They showed up, and within 5 minutes they were all set up and filming, and just like that it was all done. They probably had seven, eight, nine, maybe even 10 cameras of different kinds, GoPros and photo cameras and the big IMAX camera of course.

That really surprised me, because it was interesting to see how many people were involved in getting all the shots and making sure everything goes smoothly and figuring out where to shoot from and all that, [plus] all the different shots and all the different equipment that goes into making the movie, when at the end of the day we’re going to see very few of those in the final cut when it comes out in February.

I didn’t really have a sense of how big Shanghai was until I was actually at Tongji [University], and they [members of the Student Chapter] took us up in one of their buildings. You look out and you see skyscrapers as far as you can see. And then we went to the little town, Suzhou, on the train you just see buildings and buildings. Here [in Indiana], you drive 20 minutes out of any city and you’re in farm fields. It’s not like that in Shanghai. It just keeps going and going. That really surprised me, just how massive it was. 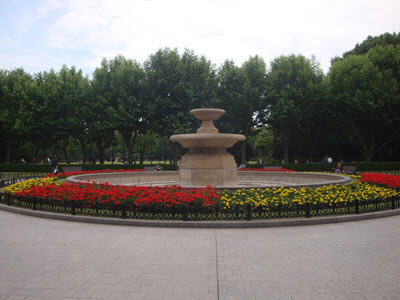 You walk down the street in Chicago and Chicago’s a pretty modern city. Decent infrastructure but not necessarily the best-maintained infrastructure. In Shanghai, I kind of noticed the opposite. It’s a little hard to describe, but the infrastructure there is much better, more taken care of. The roads aren’t falling apart, they are in better shape. The public transportation is in better shape. But things like water, for example, which we take for granted – here I can take a drink out of the tap if I want to. There, it might make you sick.

There’s been so much growth, the water systems haven’t kept pace with it. Something we kind of take for granted here. Shanghai’s a big city. New York’s a big city. I kind of threw them into the same boat, but in that sense they’re very different.

One of the other things I noticed, having been in New York City, you’ll see lots of tourists there. If you’re in Times Square, you’ll see international tourists from all different countries. In Shanghai, the biggest thing I noticed was most of the tourists were Chinese tourists who were coming to Shanghai from some of the smaller regions in China.

And of those foreign tourists, very few of them were American. I think we counted. We only saw three or four other Americans the entire time we were there. There were very, very few.

On the visit with the Tongji University ASCE Student Chapter …

I was really impressed with the students. They really pulled out all the stops to impress Monica and me. It’s no surprise that they’re getting [an ASCE] Distinguished Chapter award.

It’s hard to say. My interests within transportation are kind of nontraditional. I took a class this semester in airport design. I’ve always been interested in that and public mass transit. Just because I think highways are kind of boring, quite frankly.

Just being in a city like Shanghai where it’s more reliable to hop on the subway and that’s an option, whereas where I’m sitting right now in this town it’s not at all, I guess it kind of reinforced that that’s what I want to do and that’s what I’m passionate about. Just because it’s kind of a niche market, and it sparks my interest. 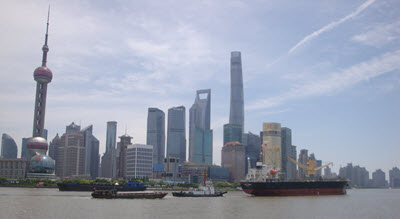 On his favorite memories from the week …

Being a transportation engineer, I thought the whole getting-around, taking the bullet train, taking the Maglev was pretty cool in itself. But the Urban Planning Museum we went to – that’s one [where] when you read it on paper, urban planning kind of sounds boring. You know, most people don’t really get excited about urban planning. But going in there, it was really neat. They have a lot of cool exhibits that led you up from, you know, this is where Shanghai started, this is how it grew, and now look where we are today, and then looking toward the future. How people get around, how the city’s expanding, how they’re managing that.

So that was kind of surprising and really cool for me. It was neat to see stuff in the Shanghai Museum – the different artifacts that they had, some of the history of why Shanghai has become what it is today. And of course meeting with the students was neat.

I guess if I had to pick just one thing as a highlight of sorts it would be the Shanghai Tower. The film crew went previously. We met with Marc, Thursday, at the Tower. Originally, we didn’t think we’d be able to get in, but he pulled some strings and was able to get us up to the 37th floor.

From the moment we got off the elevator and walked out into the atrium, it hit me that here I am standing in the second-tallest building in the world. And that’s a pretty cool feeling. Not too many people can say that they’ve done that.

Then looking out the windows just seeing the view, and seeing that there’s only a handful of buildings that you actually don’t have to look down to see – even from that point and we weren’t even halfway up it – is pretty cool. Pretty awe-inspiring for a young engineer like myself.

I think that would be the highlight, but everything we did was remarkable.