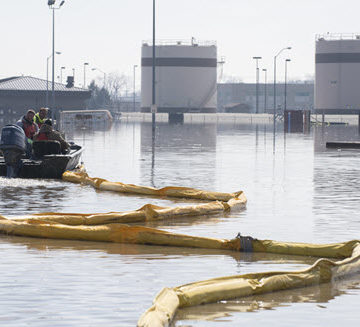 The Midwest has been battered by the aftermath of last week’s “bomb cyclone” snowstorms. The resulting combination of fast-melting snow and additional rains has led to significant flooding across several states.

Unfortunately, Nebraska, Iowa, Missouri, and other affected states may not see the unprecedented flooding levels recede until May, according to a National Oceanic and Atmospheric Administration forecast.

“These major towns, they were basically islands,” said Marie Stamm, P.E., M.ASCE, a director on the ASCE Nebraska Section board. “You could not get in or out of the town due to roads being inundated with water.”

Stamm, who grew up in Nebraska, remembers the flood years of 1993 and 1997. She also lived through the 2011 flood in Omaha. She said she’s never seen it quite like this, especially in the state’s more rural areas, outside Omaha, and with such a large impact to communities, agriculture, and infrastructure.

Stamm has seen some positives in the way communities have rallied together – grocery stores collecting donations and people volunteering to help clean houses. But mostly, it’s just a very tough time in her home state.

“You want to be able to do something, and you wish that you could tell people it will be fixed right away,” Stamm said. “You wish you could just snap your fingers. But that’s not always an option.”

For ways you can help, and to share your experiences if you live in the flood zone, visit ASCE’s Disaster Response page.