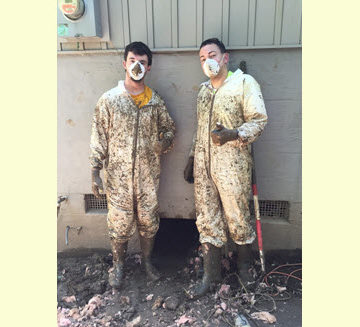 The rain started Thursday morning and didn’t stop until Friday.

Jeremy Brown tracked the storm with a fishing app on his phone.

The flash floods that poured through West Virginia June 23-26 washed away trucks, trailers, homes, and livelihoods. The water level of the Elk River, just northwest of Charleston, reached a record high. All told, the storm claimed 23 lives.

“It was pretty crazy,” said Brown, who saw the three-bedroom house he and his father built together on the banks of the Elk as a fishing camp completely uprooted. “The town closest to our camps there, Clendenin – driving through there, it literally looked like a war zone. Houses completely devastated, roads washed out.”

“I made some phone calls and identified us as an engineering group that could assist in some form or fashion in the recovery process from a technical standpoint,” said Jeff Huffman, P.E., M.ASCE, a faculty member at Marshall University and West Virginia Section president.

Huffman, along with fellow Marshall professors Greg Michaelson, Ph.D., A.M.ASCE (Section secretary), and Andrew Nichols, Ph.D., P.E., M.ASCE (Huntington Branch president), took a group of 12 volunteers out to the flood-ravaged area near the Elk River in Clay County to help locals still in recovery mode three weeks after the storm had passed.
Just getting to the sites proved challenging, with many of the roads still significantly damaged. 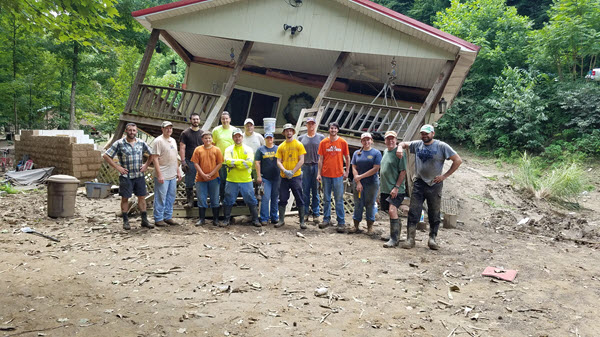 Members of the ASCE West Virginia Section helped lead a group of volunteers to assist in flood recovery work.

“We drove on a road that was wiped out in numerous places,” Huffman said. “The National Guard had reconstructed it by just dumping rocksoil fill in the missing sections,  and compacting it to gain access to the remote areas.”

They arrived at the site of Bob and Jeremy Brown’s former fishing camp, and the scene was even more shocking. The house was separated from its foundation. Meanwhile, the flood had somehow taken the stand-alone garage from one side of the house and deposited it intact on the other side of the property, 100 yards downstream.

“I think we were all taken aback when we started to take stock of what the storm had done,” Michaelson said.

The group led by ASCE volunteers went to Clay County 23 days after the storm, so by then the Elk River had returned to its normal levels. The sun was shining. People were out fishing.

Nichols couldn’t help noticing the striking contrast between this idyllic scene and the remnants of the flood’s havoc still littering the river banks.

“It’s just such a beautiful river, so serene and peaceful,” said Nichols, who volunteered along with his father and his son. “To stand there and look at how that beautiful body of water could turn around and cause so much destruction was pretty surreal.”

In all, the group assisted with recovery at five different properties, clearing mud and debris, removing a deck awning, disassembling a garage for reconstruction, along with assessing various sites for the feasibility of home salvage and creek-bank stability.

“It was really nice to see us working together,” Michaelson said. “It was like we were all a well-oiled machine. It was hard work, but in a way it was really enjoyable because we felt like we were helping out and making a difference.”

Among the volunteers, Emily Gould is a senior civil engineering student at the University of Alabama, where she is vice president of operations for the ASCE Student Chapter. She grew up in Charleston, WV, and was home this summer for an internship. She volunteered at the Elkview Baptist Church flood relief distribution center and was excited to work with the ASCE group.

“Being an ASCE member and a West Virginia resident, you pitch in where you can,” said Gould, S.M.ASCE. “You see a lot of people banding together to help their neighbors, so, for me, it’s been an inspirational story of people coming back from a tragic event.”

Bob and Jeremy Brown are looking toward the future even as they clean up their wrecked house. Jeremy said they’ve got their eyes on a site upstream, a high point perfect for a rebuilt fishing camp.

In the meantime, he appreciates the ASCE help.

“They just showed up, no questions asked and jumped in and took off working,” Brown said. “People just showing up, not knowing a soul and just starting to work like that? It’s humbling. It’s hard to put into words, to be honest with you.”

The ASCE 2016 Convention, Sept. 28 through Oct. 1 in Portland, OR, features several sessions emphasizing the importance of resilient engineering, including a NIST program titled “Guidance for Disaster Resilience Planning.”