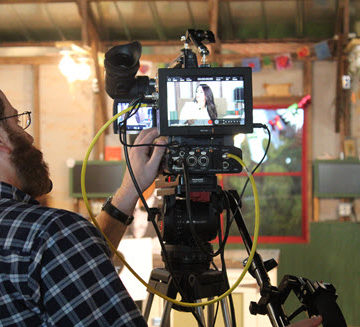 ASCE member and Dream Big star Menzer Pehlivan seen through the camera’s eye during the webcast at the Maryland Science Center.

Zion Blocker carried his gumdrop castle across the room careful not to crush the toothpick walls – or lose any of the candy.

The 11-year-old from Baltimore, MD, was one of several students to take part in a webcast, Nov. 7, at the Maryland Science Center, celebrating the forthcoming film for giant screens, Dream Big: Engineering Our World, and its accompanying educational outreach opportunities. Dream Big is presented by Bechtel and produced by MacGillivray Freeman Films in partnership with ASCE.

“First I got my idea from the paper,” said Blocker, regarding his elaborate castle design. “Then I just started being an engineer.

“It’s all about building and imagination.”

Building and imagination is a pretty good summary tagline for Engineers Week, DiscoverE’s annual celebration of all things engineering. ASCE and Bechtel are co-chairs for Engineers Week 2017, Feb. 19-25, which coincides with the world premiere of Dream Big.

ASCE and DiscoverE have developed several ways families, educators, and museum professionals can get involved:

• Connect with your local museum screening the film

“If you want it, you can do it. It’s about starting the dream,” Pehlivan told the group of children at the museum and the webcast audience worldwide. 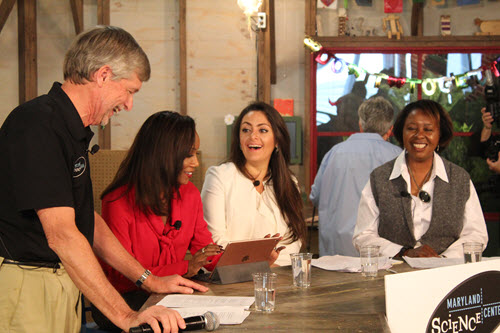 Pehlivan, a 2016 ASCE New Face of Civil Engineering, is a geotechnical engineer for CH2M in Seattle. She was inspired to become a civil engineer after surviving a massive earthquake as a teenager in 1999 in her hometown of Ankara, Turkey.

“I think this movie will help a lot to bring younger kids, younger women, and people with diverse backgrounds into engineering, showing them that they can do it too,” Pehlivan said. “We need to raise awareness so that we can grab those brilliant minds and show them that through engineering they can change the world.”

Goines is a project engineer for Bechtel, based in Washington state. She’s been involved in educational activities for most of her career, tutoring students, speaking at schools, and judging competitions. The film appearance is a whole new level of outreach, though.

“It’s important for children to see what engineering really is,” Goines said. “We need to be able to go talk to our children and have them see it. If you can see it, you can be it.”

Just ask Zion Blocker. What does he want to be when he grows up?

“I have a lot of choices. Definitely engineer,” Zion said, before adding, “Or sports or acting.”