Vibrancy to Vacancy and Back Again 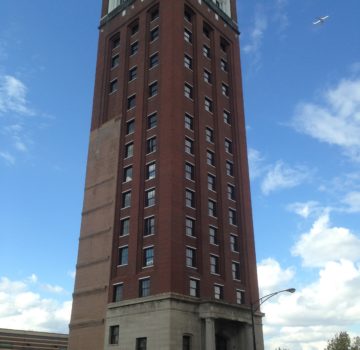 Approximately 1.5 million tourists visit the Willis Tower Skydeck each year. Few of them will glimpse the original Sears tower. The North Lawndale neighborhood of Chicago was once home to Sears original world headquarters. In 1905 the sprawling complex included administration buildings, factories, show rooms, and it’s own central power plant. Most of the buildings have since been torn down, and the once-thriving neighborhood is among the poorest in the City. A recent surge in development, including mixed income housing for over 300 families, renovations to the historic show room tower, and the adaptive reuse of the power plant into a charter school, has provided a major boost to the neighborhood.

Sears, Roebuck and Company (Sears) was founded in 1893 and was the country’s largest mail order retailer seven years later. It was a bigger deal than Amazon in its day; you could even buy complete homes and have them shipped to your, um, doorstep. The plant, built in 1905, had 3 million square feet of floor space, making it the world’s largest business building at the time. In its heyday the company employed 22,000 on site. The facility remained Sears headquarters until the completion of the 110-story tower in Chicago’s Loop district in 1974. The distribution facility was finally shuttered in 1987, and most of the factory was demolished thereafter to make way for the Homan Square Community Center Campus.

I think it’s a shame that more of the buildings weren’t preserved and adapted to new mixed use. Luckily the tower was saved, in part because it was listed on the National Register of Historic Places. The 252 foot tall tower was once home to local radio station WLS (creatively standing for World’s Largest Store). The tower is currently under major renovations. Most of the exterior brick repair has been completed, but the interior renovations continue. The building was open for public exploration last October as part of the city-wide Open House Chicago event. This unique annual event provides visitors rare behind the scenes tours of local landmarks and hidden gems. The developers hope that the tower can be used to promote arts, culture, and youth development.

We also had a chance to tour Power House High during the open house. Through a $40 million renovation effort, the old power plant was transformed into a modern high school. The school achieved LEED platinum certification in part through extensive building reuse, geothermal heating and cooling, water conservation systems, and daylighting via skylights. The most interesting aspect of the renovation was the inclusion of some of the old generators, coal bunkers, and other industrial machines which pay homage to the previous use. Two charter school operators share the building. The percentage of students who graduate from these institutions and go on to college beats the city average by 10%.

The examples set by the Sears tower restoration and Power House High adaptive reuse demonstrate the ability to reinvigorate a neighborhood by looking to the character of its past.