The Pax Romana, or Peace of Rome, encompassed two remarkable centuries of western history. From 27 B.C. to about 180 A.D., Rome consolidated its power within borders that included the entire Mediterranean region and extended as far north as the British Isles. It’s thought that citizens could travel from Alexandria to Paris using the same currency throughout the trip and expect to find public servants speaking the same Latin language. At the same time, Roman architects and engineers were perfecting the art of city planning and constructing monumental population centers throughout the empire.

Roman influence penetrated well into the heart of France. In a relatively short time, the Gauls of southern France adopted Roman customs and began to flock to Roman cities. Vaison-la-Romaine was one such urban center. Located in the shadow of Mt. Ventoux, it seemed an unlikely site for a large roman settlement to me. However, it is home to one of the largest Roman archeological sites in France. A complete commercial center, a hillside theater, a bath-house and several huge residences can be seen among the ruins. 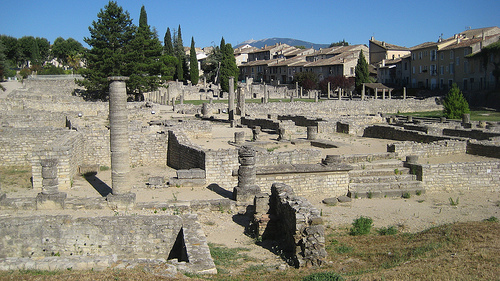 Most of the buildings’ facades have long since deteriorated away, but the foundation walls and a series of (perhaps) reconstructed columns allow visitors to imagine the experience of walking through a Roman city. Walking along a street in the commercial district, you can visualize the merchants peddling their wares from their appointed stalls. Entering through one portal, visitors would have been greeted by a statue of Mercury, the Roman god of commerce. Continuing on through the interior courtyard, you might have seen where the daily cost of goods was negotiated – an ancient stock market of sorts.

The other side of town was home to the wealthiest Roman citizens. Their mini-palaces sprawled over multiple city blocks and often featured private gardens and baths. The servants and family lucky enough to live with such a patron could enjoy running water and state-of-the-art plumbing. Conveniently, these wealthy and politically connected residents lived closest to the city’s theater. Over time, however, the strength of the empire ebbed, under constant pressure from foes on all borders. In the ages following the fall of the Roman Empire, villagers moved into more defensible walled cities. Vaison-la-Romaine is also home to a walled medieval village. Standing tall on the highest rock outcropping within the city is an imposing citadel. Narrow cobble-stone streets wind gradually up to the masonry fortress. It’s likely that much of the stone used to build the medieval city was mined from the ruins of the Roman structures. Excavations around the edge of a nearby church clearly show that Roman fluted column sections were used to create foundations for the church walls. The practice of recycling building materials is age old. It’s clear that the medieval residents of the city has no qualms about historic preservation. However, later generations can be glad that they weren’t more efficient in mining the Roman city.

View more of my photos of Vaison-la-Romaine on Flickr.