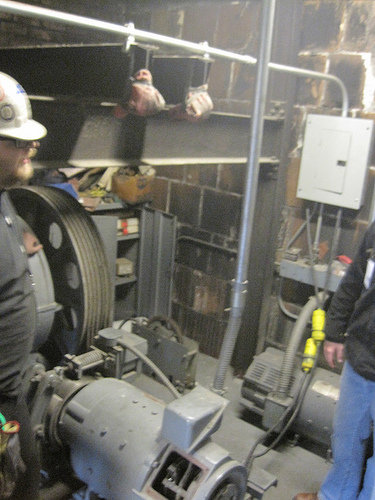 Elisha Otis invented the “safety elevator” in 1852.  His invention prevented the elevator cab from plummeting to the ground in the event of a cable break.  This breakthrough gave confidence to the wary public that ascending tall buildings could be expedient and safe.  By the time the Monadnock building was built in 1891, the idea of living and working in a 17-story “skyscraper” seemed plausible.  The high-rise would never have become such a fixture in our skylines withouth these vertical transportation workhorses.

Even today, the upper limit of building construction is partially determined by the ability to quickly and safely lift people to the top floors.  Many different technologies have been employed over time.  Willis Tower (formerly Sears Tower) employs a double-decker car for the business commuters.  Taipei 101, which held briefly held the title of world’s tallest, employs elevator cars with ceramic brakes similar to those used on high performance sports cars.

Buildings of all heights have benefited from advances in elevator design.  Lately, I’ve worked on several elevator upgrade projects.  We typically need to investigate the existing elevator support structure to determine if it’s adequate to carry the new equipment.  Upgrades can include increasing the car capacity or switching from cable pulled cars to a hydraulic cylinder push style.  The latter requires evaluating the existing foundations or basement slab. Lately, we’ve also been asked for help to retrofit existing elevators with new emergency break devices.  Elevators have long had redundant means of preventing a Hollywood-style plunge, but new rope grippers engage quickly to prevent small slippages.  The challenge with such a device is figuring out how to anchor it to the existing framing.  Space is always limited in the old machine rooms, and the structural steel machine beams are not always accessible from above the slab.  We actually helped one elevator company engineer a mounting bracket to install the gripper upside down in the overhead space between the cab ceiling and the machine room slab.

When the personnel elevator was invented in the mid 1800s, high-rise living was unheard of.  Even as buildings began to row taller, myths abounded the effects on the human body, and critics charged that no one would want to live or work so far above ground.  Although skyscrapers have proven successful, safety concerns persist – especially in the wake of the 9/11 and recent high magnitude earthquakes in Chile, New Zealand, and Japan.  The irony of concerns about tall building performance during disasters is that these buildings are generally subject to more stringent design criteria than single family houses and low-rise apartment buildings.

Nevertheless, the elevator remains a driving force in the viability of skyscrapers.  Might further advances in elevator safety permit operation during emergency events and expedite building evacuation?  Elevators (and the technicians that service them) may become even more important even; let’s top taking their services for granted.