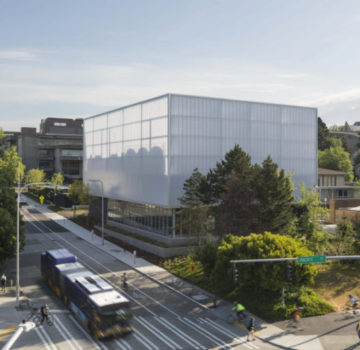 The Institute for Sustainable Infrastructure awarded Envision Gold to the University of Washington’s West Campus Utility Plant in Seattle. The project is among the first higher education buildings in the United States to receive an Envision Award.

The West Campus Utility Plant is a design-build project developed to expand central utility capacity for the University of Washington. While the university community is the primary user of the facility, the project team also worked with the local community to ensure the facility positively contributed to the broader university district, nearby neighborhoods, as well as the public.

The project incorporates measures to prevent pollutants from contaminating surface and groundwater, such as redundant systems with sophisticated leak detection and monitoring. The project includes a double-wall 30,000-gallon fuel oil storage tank and a fuel distribution system for the rooftop generators. A leak detector and a transition sump design contain potential fuel leaks. Additionally, the project’s refrigerant monitoring system provides monitoring and automatic equipment to shut down the system in the event of a refrigerant leak. During the design process, an abandoned underground oil storage tank was found on-site and all hazardous materials were abated and removed to remediate existing and prevent future contamination.

Before the West Campus Utility Plant project, the existing site was a parking lot with an under-used building, isolated foot path, overgrown vegetation, and an alley. The foot path was isolated from public view, attracting unwanted activities. The landscape design for the project improved these conditions, contributing to a more livable campus community. It improved access to existing amenities by repairing the pedestrian infrastructure and making it safer, enhancing the aesthetic character of the campus through the removal of overgrown vegetation, and creating an improved sense of safety and security by removing informal foot paths and adding lighting to the site.

The project incorporates a large polycarbonate screen wall into the project’s design that serves to hide equipment from view, thereby improving the overall aesthetics of the building, and helping to maintain the character of the campus. This screen wall is also a unique campus landmark that will help orient pedestrians, and act as a distinctive “gateway” to the campus. The project also incorporates interactive LCD displays at the pedestrian level to encourage participation in dynamic content and improve the overall appeal and character of the facility.

A key element of the Progressive Design-Build project delivery method for the project was the early involvement of the constructor’s trade partners. Allowing trade partners (subcontractors) to make design suggestions based on their extensive knowledge of procurement, fabrication, and installation increased the efficiency of the project’s delivery. Several organizations worked in collaboration with UW to deliver the sustainable infrastructure project, including Mortenson Construction, Miller Hull, Arup, GGN, KPFF, and O’Brien and Company.