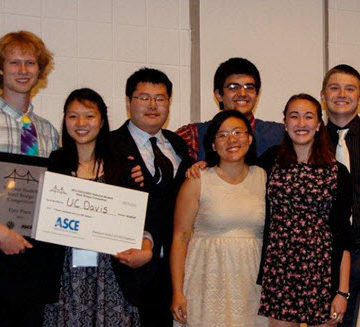 After finishing third in the competition last year, the University of California, Davis (UC Davis) returned this year to win the 23rd Annual ASCE/AISC National Student Steel Bridge Competition (NSSBC), hosted by the University of Akron’s College of Engineering, May 23-24 in Akron, Ohio. A total of 47 student teams and almost 600 registered students and faculty advisors from the U.S., Canada, Mexico, and Puerto Rico participated in the 2014 NSSBC.

UC Davis became the champions for the first time since 2005, and for only the second time in the school’s history. For receiving the highest overall score and winning the competition, ASCE President-Elect Robert D. Stevens, Ph.D., P.E., AICP, F.ASCE, presented the UC Davis student team with a check for $3,000 for student scholarships.

“We are thrilled about the fact that we won,” says Dawn Cheng, Ph.D., M.ASCE, faculty advisor for the UC Davis Steel Bridge Team and associate professor at the UC Davis Department of Civil and Environmental Engineering. “I know [after finishing third] last year we are getting closer and closer to beating the other teams but I was still shocked that we were able to climb to the top this year.

“It took a whole team effort, not the work of any one individual,” added Quincy Dahm, S.M.ASCE, one of the team captains of the UC Davis Steel Bridge team, which included 15 members. “We are all really happy to have won [the] Student Steel Bridge Competition.”

A Great Honor to be in Akron, Ohio

For the second consecutive year, the Massachusetts Institute of Technology finished second and won $2,000, and the University of California, Berkeley, which finished first last year and captured the top prize 3 times in the past 8 years, had the third-highest score and received $1,000 in student scholarship monies.

“It was a great honor to be in Akron, Ohio, for the National Student Steel Bridge Competition hosted by The University of Akron, my undergraduate school,” says Stevens, who served as one of the judges of the competition. “[The] bridges were 100% steel and measured about 20 feet in length. Each of the 47 bridges was judged on aesthetics, time to be assembled, weight, deflection under load, and cost of labor and materials.

“I had the opportunity to be one of the judges that timed the assembly of 11 of the 47 competing bridges. The 47 bridges represent the hard work of many civil engineering students working in teams and demonstrate the students’ abilities to design and construct a wide variety of structures to specific specifications that can support the loads applied to them. It was my privilege [at the competition] to help recognize the three overall winning teams [at the awards ceremony].”

Sponsored by funding from the ASCE Foundation and the American Institute of Steel Construction (AISC), the NSSBC offered future structural engineers the opportunity to display their skills in steel design, steel fabrication, and teamwork. The bridges designed by the student teams were scored by a team of 40 judges in the areas of how long it took to construct the bridge, its stiffness, its lightness, how economically it was built, how it [was] displayed, and how efficiently it was built. Each year, the NSSBC rules committee tweaks the rules somewhat to offer the students a different challenge, so that they are not designing and building the same bridge each year of the competition.

“I think our team responded well to the changes in the rules,” explained Dahm. “[The rules committee] made a pretty big change this year with an increased focus on the lightness of the bridge. Historically, it has been construction speed that allowed a team to come in first place, but this year that was not the case and we recognized that early on so we created a very lightweight design.”

A Win-Win for All the Teams Who Participated

“This was a fun event and everybody seemed to have a good time,” notes David Roke, Ph.D., EIT, A.M.ASCE, assistant professor at the University of Akron and faculty advisor for both the 2014 NSSBC Hosting Committee and the school’s steel bridge team. “Whether or not you go home with any scholarship money, it is still win-win for all the teams that participated. At the end of the day students will leave here with a very positive experience of problem-solving and working together as a team.

“I know some schools like our team, we did all the fabrication ourselves so the students learn some nontraditional engineering skills, like doing all their own welding, their own grinding, or their own assembly, so I think that’s an excellent practical lesson for them. Because when they leave school and go out into the real world, they may not be doing these kinds of things but they know how it is done, what goes into it, and what issues would be faced so they are not just designing.”

“I think what the students got most out of the competition was the satisfaction of being able to apply engineering knowledge and turn their design into a final product,” says Cheng, who received an ASCE ExCEEd 2006 Teaching Fellow. “The students learned leadership skills and how to collaborate and coordinate with other people in the lab, but by the time they all graduate, Steel Bridge will be something that they were never [able to] experience in classroom. So I think when these students become professional civil engineers, this will be something that they can look back on and really appreciate.”

“The important thing that I learned from the Student Steel Bridge Competition,” added Bahm, “is how to collaborate with other engineers. Along the way you run into so many mistakes and challenges but you need to recognize and accept other peoples’ ideas.”

These Students Have What It Takes

“The students who put all of their time and effort into Student Steel Bridge Competition are the ones who you know are going to succeed, whether they want to get jobs in structural engineering or…in geotechnical construction management,” concluded Roke. “Because of what they learned from this experience, these students have what it takes to look at a problem, work together, and find a solution – all the practical skills that are needed in engineering and out of engineering.

“At this competition you had 47 different solutions to one problem and everybody had a good time applying theirs.”