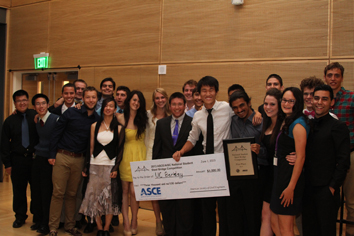 A team of 30 students from the University of California, Berkeley won their 2nd straight ASCE/AISC National Student Steel Bridge Competition (NSSBC), which took place May 31-June 1, at the University of Washington’s School of Civil and Environmental Engineering in Seattle. Don A. Sepulveda

The weekend of May 31, residents of Washington State watched as engineers began erecting a temporary steel bridge over the Skagit River, to replace the 160-foot span of a 4-lane bridge that had collapsed a week earlier, after being struck by an over-height truck.

Just 60 miles away, on the campus of the University of Washington in Seattle, 620 civil engineering students erected their own temporary steel bridges in a competition to demonstrate their engineering skills.

For the 2nd consecutive year and for the 3rd time in the past 7 years, a team of students from the University of California, Berkeley captured the title as champions of the ASCE/AISC National Student Steel Bridge Competition (NSSBC). A record 49 student teams from the U.S., Canada, and Puerto Rico participated in the 2013 NSSBC, which was hosted by the University of Washington’s School of Civil and Environmental Engineering May 31-June 1. The 22nd annual NSSBC was sponsored by ASCE, with funding from the ASCE Foundation and the American Institute of Steel Construction (AISC).

“One of the great things about the Steel Bridge Competition is that it gives the students an opportunity to test out everything that they learned about structural analysis in a very realistic way and in a very realistic competition,” said Jeffrey W. Berman, A.M.ASCE, Thomas and Marilyn Nielsen Associate Professor of Structural Engineering and Mechanics at the University of Washington’s Department of Civil and Environmental Engineering and the organizer of the 2013 NSSBC. “The constraints that are used to form the competition are the same constraints that engineers face when they design a bridge, and the competition gives the students a very good sense of how things are designed and constructed in the real world, at least on the bridge engineering side. I think the students understand this, and that is why the Steel Bridge Competition is so popular and so many teams sign up for it every year.”

“I am very excited and proud of our team,” says Fayad Rahman, captain and project manager of the 30-member University of California, Berkeley Steel Bridge Team. “We all had great, great fun, but it turned out to be one of the best learning experiences and helped further my development as an engineer.”

“Right from the moment when the rules and bridge problem statement came out last summer, we started working as a team, trying to figure out the best way to design, fabricate, and construct a steel bridge,” Rahman said. “We worked on a tight schedule, beginning with completing the design phase in the fall. In the spring, we were in the shop for hours and hours on end. ”

For earning the highest overall score, the University of California, Berkeley was presented a $3,000 check from ASCE. The Massachusetts Institute of Technology, which placed 2nd for the 2nd consecutive year, earned $2,000, and the University of California, Davis finishing third and received $1,000. The prize money was provided by the ASCE Foundation.

The bridges designed by the student teams were scored by a team of 55 judges, earning points for the time it took to construct the bridge, its stiffness, its lightness, how economically it was built, how it displayed, and how efficient it was to build. Each year, the NSSBC rules committee modifies the rules somewhat to offer the students a different challenge, so that they are not designing and building the same bridge each year of the competition.