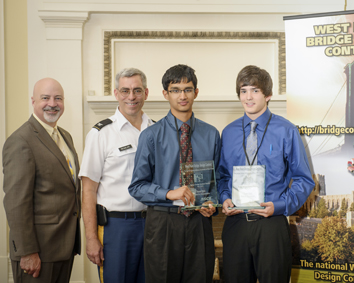 For virtually designing 2 bridges that could carry the design load at the lowest cost, West Virginia high school students Aniket Zinzuwadia and Nick Bartusiak captured the $10,000 first place scholarship prize at the 2013 West Point Bridge Design Contest sponsored by ASCE. It was the second straight year the pair took top honors in the competition, defending their championship against 10,000 teams that competed in the preliminary rounds, and besting 5 other teams that made it to the national finals.

“I still am amazed at the fact that we won the contest two years in a row,” says Zinzuwadia, who lives in Beckley, West Virginia. “This contest in my opinion is an amazing tool for us students to use to harness our math and science skills, which has taught me a significant amount about the application of science in the real world.”

“It was very exciting to get the opportunity to be able to compete against a whole new group of finalists, and coming out on top again was awesome,” added Bartusiak, who is from Shady Springs, West Virginia. “I learned to expect the unexpected because of the change [in the design criteria] of the competition in the final round.”

The West Point Bridge Design Contest was begun in 2002 as part of ASCE’s 150th anniversary celebration. It is a truss bridge design contest in which middle and high school students download free software to their computers and, using a given set of specific conditions, build a bridge virtually on their computer. The goal is to design a bridge that successfully carries the design load with the lowest overall cost. Designs are uploaded to the website for load testing, and the website provides immediate feedback about each contestant’s current standing. Contestants are allowed to submit as many designs as they wish.

At each round of the competition, teams are given a new set of bridge specifications. The final round, where they have to build 2 virtual bridges, is a live competition that this year was held on May 2 at the United States Military Academy in West Point, New York.

“The students who competed in this competition learned a tremendous number of things,” says James J. O’Brien, Jr., P.E., M.ASCE, ASCE’s managing director of the Professional and Educational Activities Division and member of the Board of Directors of the West Point Bridge Design Contest. “Other than learning about engineering and the design of truss bridge design, one of the most important things they learned about was teamwork, because the idea behind this competition is that they are on a two-person team, so they have to work with somebody else. So it can’t be a situation where one person is the brains of the team and the other person is just along for the ride; students have to work together.”

The contest was originally designed and is still organized by Col. Stephen Ressler, Ph.D., P.E., Dist.M.ASCE, professor of civil engineering at the United States Military Academy.

Finishing in second place and each earning a $5,000 scholarship was the team of Ty Frazier and Brady Ingersoll from Wasilla, Alaska. The final round teams, who each received a laptop computer provided by Dell, were Martin Kurian and Vickram Rajendran from Hockessin, Delaware; Liam Pinion and Michael Ramsey from Morgantown, West Virginia; Dylan Catapane and Ken Rupp from Archbald, Pennsylvania; and Joshua Brown and Brad Dissinger from Hamburg, Pennsylvania.

“Many of these students are going to be the next generation of civil engineers, people who have an interest in solving civil engineering kinds of projects and, in this particular case, constructing bridges to span a gap safely,” concluded O’Brien. “But, there also are some contestants who may never become a civil engineer, and what they come away with is a better understanding of the engineering thought process, engineering design, and how engineers work together to solve problems for mankind. So what we end up with is a more literate society.”

The organizers of the competition encourage teachers and engineering professionals to run their own local West Point Bridge Design Contest in conjunction with the national competition. Many states such as West Virginia hold their own annual statewide contests.