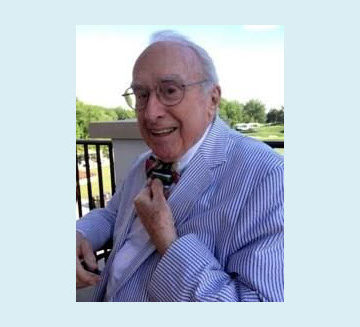 Arthur J. Fox Jr., Pres.1976.ASCE, F.ASCE, among civil engineering’s most influential figures of the 20th century, both at ASCE and as a longtime editor of Engineering News-Record magazine, has died at 92.

“Art was a dear friend and a true American hero,” said ASCE Executive Director Thomas W. Smith III, ENV SP, CAE, F.ASCE. “After serving his country during World War II, he worked tirelessly to advance ASCE and the profession for over 60 years.

“His leadership, contributions and counsel greatly advanced ASCE and the profession, ranging from drafting anti-corruption ethics provisions to founding the Industry Leaders Forum. I am grateful to have had the opportunity to say goodbye and thank you to Art the week before he passed away. While he will be greatly missed by his ASCE family, we take comfort in his lasting legacy with ASCE and the civil engineering profession.”

Fox was instrumental in establishing a new ethics standard for ASCE as the Society president in 1976, pushing a revised canon that read: “Engineers shall act in such a manner as to uphold and enhance the honor, integrity, and dignity of the engineering profession.” He helped author a revision 30 years later to reflect the Society’s policy of “zero tolerance for bribery, fraud, and corruption.”

After receiving a Bachelor of Science degree in civil engineering from Manhattan College in 1947, he started working for ENR. By 1964 he was editor-in-chief, a position he would retain until his retirement in 1988. Under his watch, the magazine furthered its reputation as a leading source for industry breaking news and commentary. Fox developed the magazine’s now-iconic firm rankings and annual Award of Excellence.

Fox was an ASCE Life Member. For an article on the ASCE website four years ago, he said, “It’s hard to separate ASCE from my personal life because ASCE has been a total part of my life.

“I claim – and I think I could prove it,” he added, chuckling, “I’ve never been without an elected or appointed office in ASCE since 1948.”