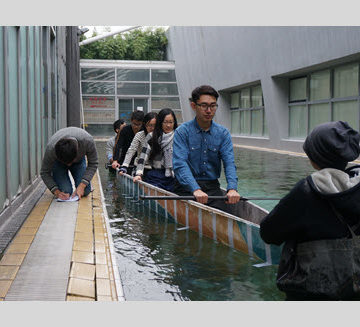 Throughout the next few months, ASCE News is going to check in with different concrete canoe teams from around the world for updates and perspectives from the front lines of one of the Society’s most popular student programs.

Located in Shanghai, China, Tongji University was founded by a German physician in 1907. For more than 100 years, the university has been sticking to its motto: “Discipline, Practicality, Unity and Creativity,” and the foundation of Tongji concrete canoe team fits well with this motto.

Established in January 2012, Tongji’s concrete canoe team competed at the Mid-Pac Conference in April 2013 with their first canoe, China, and placed sixth. In 2014, the team won second place with Operace at regional competition to qualify for the nationals in the United States at the University of Pittsburgh, Johnstown.

Choosing Chinese culture as the aesthetic theme has been a tradition of the Tongji concrete canoe team. As the only international team from China, we hold the belief that we not only represent their own college but also the whole nation. Every year, the Tongji concrete canoe team brings a canoe full of Chinese flavor to the United States. This year, our theme stems from a well-known ancient myth in China.

Inheritance is one core spirit of Tongji concrete canoe team. As a matter of fact, considering the limitation of our budget, which is not enough to cover all members’ traveling expenses, only a small number of the team members get a chance to participate in competition in their second or third year on the team. To get more team members involved in the competition, veterans won’t participate in the following years even though they are still qualified and more experienced.

The 2014 Tongji Concrete Canoe qualified for the national competition.

Experience and guidance from veterans who have already competed in the regional competition are of vital importance to the 2017 team members. Not only are the 2017 team members devoting themselves to the program, the veterans are doing the same as well. Because the veterans won’t be on the spot with freshmen in the competing process, the whole team needs to devote even more in the preparing process.

Innovation is always highlighted as another core spirit. After years of improvements and innovations, the Tongji concrete canoe has developed its own technical system. Every year we use innovative thinking to make the whole project better and more efficient.

For example, one problem found by the 2017 team is that too many kinds of mix applied to the canoe took lots of research time. So, a mathematical model, which helps improve the material research level, has been developed and the number of mix specimens is reduced this year. Improvements like this are made every year which becomes the key to the young but competitive team.

As an international team from China, Tongji’s concrete canoe team overcomes a lot of difficulties that most local teams wouldn’t face. The ocean shipping takes us about a whole month, which greatly shortens the casting and finishing procedure. The high cost of shipping forces us to cast a higher-quality canoe with less budget. There remain many unknown factors that may threaten the safety of the canoe, which leads to a much stronger and heavier canoe than racing requires. After years of exploration, Tongji concrete canoe team has mapped out a relatively perfect workflow, which reduces the risk brought by ocean shipping to the minimum.