After cheering the steel bridge team onto a first place finish, I led the canoe team to the Home Depot for supplies to reconstruct their canoe.  We wandered the aisles searching for inspiration.  Frequently, the team members asked, “what do you want us to find?”  I had no idea; I would only know when I saw it.  First, we would need some bolts and washers.  Our basic idea was to bridge the complete crack with four lengths of tube steel left over from the bridge team‘s fabrication.  To provide more stiffness, one of the canoe crew suggested wrapping the hull with a metal lathe – almost like a metal skin bridging the crack.  This seemed plausible.  We pressed on. 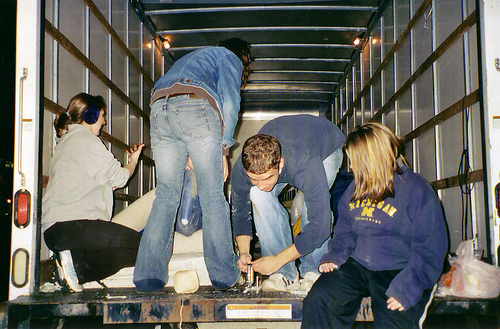 Returning back to the parking lot, we started to divide up the labor.  Some would be responsible for preparing the tube steel, wire brushing off the coat of grease applied for weather protection.  Others would begin drilling holes into the canoe to receive the bolts.  More still would start cutting large Styrofoam sections to fit inside the canoe and bridge the gap, providing more flotation while stabilizing the hull.

Simple as the procedure sounded, it took a long time.  Working in the hotel parking lot.  We were further slowed by the power limitations of the cordless electric tools.  More than once, all work was suspended while the tools recharged.  When morale was lowest, during one such break, the steel bridge team, high off an exceptional performance earlier in the day, brought the party to their struggling peers.  The atmosphere was uplifting, but everyone was wary that the canoe might still fail to float.

We concluded our work sometime after 2 am.  Those who would be paddling the next day were allowed to leave early and prepare themselves for the unenviable task of piloting the Frankenstein-like canoe.  Despite the anticipation everyone was sufficiently exhausted from the re-construction work to fall right to sleep.