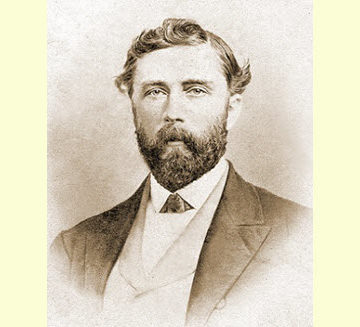 March is the anniversary of the birth of Theodore Judah, renowned engineer, visionary, and lobbyist for America’s first transcontinental railroad.

Born March 4, 1826 in Bridgeport, CT, Judah and his family moved to Troy, NY, soon after his birth. He attended Rensselaer Polytechnic Institute in Troy and, upon graduation, went to work on a railroad being built from Troy to Schenectady. Following that first exposure to railroads, he worked on a series of railroad and canal construction jobs. In 1848, he helped plan and build the Niagara Gorge Railroad.

In 1854, while overseeing construction of a segment of the Erie Canal, Judah was offered the position of chief engineer for a planned railroad in California. The Sacramento Valley Railroad was to run 21 miles from Sacramento to the edge of the gold fields in the foothills of the Sierras. Judah’s initial survey work was completed and grading work started in February 1855. This first railroad to be built on the Pacific Coast was completed in February 1856.

In 1859, the Pacific Railroad Convention was held in San Francisco. California desired the construction of a transcontinental railroad to remedy transportation problems between the new state and the rest of the Union. The convention initiated a set of recommendations for federal assistance and gave Judah the task of presenting them to Congress. Judah’s lobbying efforts were favorably received by President Buchanan and both houses of Congress. His vision, advocacy, and enthusiasm in California and in Washington, DC, earned him the moniker, “Crazy Judah,” but also made possible America’s first transcontinental route.

After his grand railroad idea was stymied by the election of 1860 and threats of secession from the Union by Southern states, Judah managed to convince a small group of investors to provide the minimum amount necessary to bring the Central Pacific Railroad into being. Judah’s selected route crossed the mountains near Donner Summit in order to provide direct access to newly discovered Nevada mines. Because the Sacramento financiers were merchants interested in controlling the flow of supplies to those mines, they accepted Judah’s proposal even though other groups suggested alternatives that might prove easier to construct. Judah was sent to Washington to present his plans to Congress and to request federal assistance for the project.

Judah arrived in Washington just after the start of the Civil War. He presented his plans as a war measure designed to tie California and Nevada more securely to the Union and to ensure the continued flow of gold and silver from the West into the Northern states. He helped write the Pacific Railroad Act which made provision for assistance to the Central Pacific Railroad. The Pacific Railroad Act was signed by President Lincoln, July 1, 1862, and the transcontinental railroad was initiated.

Judah returned to California and began surveying the new line immediately. The formal start of construction was celebrated in Sacramento, Jan. 8, 1863. Soon thereafter relations between Judah and his associates began to deteriorate. In the fall of 1863, an argument erupted over redefining the geology of the Sierra Mountains to justify additional federal assistance for the project. Judah’s staunch opposition so angered his associates that they demanded his ouster from the project. Judah’s associates paid him $100,000 for his shares in the company along with options to buy out the others for the same amount of money.

Judah left San Francisco early in October and sailed for New York intending to raise the money necessary to buy out the Sacramento group. In crossing the Isthmus of Panama he contracted yellow fever and died in New York, Nov. 2, 1863, at the age of 37. He is buried in the Federal Street Cemetery in Greenfield, MA.