The Project That Revitalized New Orleans 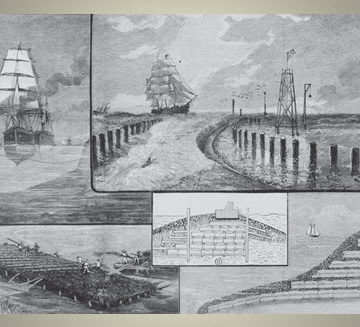 Cargo shipping from St. Louis to Europe via New Orleans increased by a factor of 66, restoring trade to the post–Civil War South and revitalizing the impoverished city of New Orleans.

Previously a thriving river community and economic hub on the Mississippi River, in the 1860s, war, poverty, and flooding devastated the city of New Orleans. The mighty Mississippi River had long been a lifeline for the country’s transportation and commerce, but in the late 1800s the mouth of the ever-changing Mississippi was silting up, creating areas as shallow as eight feet. Sandbars blocked the passage of increasingly larger riverboats and of oceangoing vessels, with their deep drafts. After years of fruitless attempts at dredging, dragging, and building a bypass canal to create a deep-draft channel at the river bar, engineer James Buchannan Eads had a different vision.

Eads received no formal education after the age of 12. He educated himself by reading books on physical science, mechanics, machinery, and civil engineering. While working as a steamboat clerk he was involved in a steamboat accident, which inspired him to develop a means to recover riverboat salvage from the bottom of the river. In the 1860s, Eads designed and built his namesake bridge, the first road-and-rail bridge to cross the Mississippi River at St. Louis.

A decade later, Eads envisioned a self-scouring channel through the South Pass. Eads financed the project himself, agreeing to be paid only if the mouth reached targeted depths. He made his proposal to Congress in February 1874. In 1875, Eads finally won a contract to build his jetties.

Construction began in June of that year. Eads created his self-scouring channel by constructing wing dikes, perpendicular to current flow, which forced the current into a narrower cross section. The current scoured the river bottom, pushing the silt far out into the deep Gulf waters. This created a nearly permanent channel that required only periodic dredging to maintain navigability. The engineering was inspired, but the construction was simple. Pilings were driven into the seabed and mats made from willow branches were laid between them. Over time, mud would settle into the mats and make a solid wall.

On July 8, 1879, M. R. Brown, Captain of Engineers U.S.A., certified that “there was a channel at the mouth of South Pass, through the jetties, 30 feet in depth without regard to width, measured at average flood-tide, and extending from a wider and deeper channel in South Pass to deeper water in the Gulf of Mexico.” On July 10, 1879, Brown certified “there was a navigable channel through the shoal at the head of South Pass, having at average flood-tide a depth of 26 feet.”

With completion of the jetties came the huge increase in total tonnage of cargo shipments over the amount shipped five years before. The channel is no longer maintained for deep-draft traffic, due to a decline in maritime shipping. But the principles that guided construction on the South Pass made possible the high performance of the Southwest Pass, currently the predominant seaward approach to the ports of New Orleans and Baton Rouge.