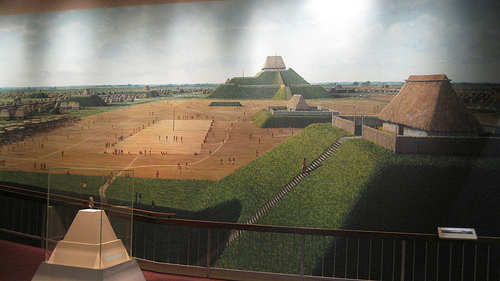 Advanced civilizations occupied North America long before European explorers reached American shores. Fascinating archaeological digs are taking place in the Heartland. I recently had the opportunity to talk with Professor James Brown of Northwestern University about his discoveries in Cahokia, Illinois.

Between the 11th and 13th centuries A.D., a thriving Mississippian society sprung up in a network of cities along the length of the Mississippi River. Their domain extended west to the foothills of the Rockies and as far east as Florida. The settlement at Cahokia (near present day St. Louis) was perhaps the largest, with as many as 20,000 inhabitants. At the time it would have been more populous than London.

To sustain such a large population, the culture must have been suitably complex. We know, at least, that they were extraordinary farmers – growing corn, squash and seed-bearing plants. Many of the other grains that we associated with the Midwest today, like wheat, barley and oats actually arrived in the New World with the Europeans. The Cahokians initially supplemented their diet by hunting, fishing and gathering in the abundant Mississippi valley.

Cahokia was constructed on the sacred north/south axis. Large boulevards led to a large plaza in the center of the city. The most holy structure was a mound that encompassed an area greater than the Great Pyramid at Giza. Alternating layers of light and dark soil bands would have given the impression of spiraling toward the heavens. The city layout and spiraling mound were consistent with the imagery in the ceremony and smoking of the peace pipe performed by several Native American cultures. The pinnacle of the mound was crowned with a large post. It was probably struck frequently by lightning, providing all the proof necessary of communication with the spirit world. n the early 1800s. It stands over 100 ft. tall and consumes an estimated 22 million cubic feet of earth. The most remarkable aspect of the mound, however, is the speed with which the Cahokians constructed it. Although several publications – as well as the Cahokia Visitor Center – state that construction took decades, Professor Brown’s research indicates that it was built in less than two years. This is surmised based upon the consistency of the soil and the dating of artifacts and plant remains within the strata.  The scale and speed of the mound’s construction suggests that there was a very charismatic leader to lead the society into a golden age. As the settlement grew, the central government needed to become stronger to keep the peace and distribute the abundant harvest. It’s possible that this leader was revered as a living god. Other mounds were constructed for various purposes: for lesser government officials, burials, defense and to mark important locations. The mounds come in three forms: rectangular platforms, conical burial mounds, and triangular markers. It is rumored that Sacagawea’s child was baptized at a Trappist monastery later constructed on one of the lesser mounds.

Although there were many significant constructions within the ancient city, Professor Brown contends that the most amazing engineering feat was the leveling of the land for many miles around the city center. We tend to think of the Midwest as having long uninterrupted flatlands, but much of the suburban landscape was leveled by bulldozers to create a consistent subgrade. The Cahokians were well ahead of their time. It has also been suggested that their terra-forming helped define the route of several highways that cross Illinois. In addition to the mounds, archaeologists have discovered the remains of some timber constructions on the site. The residents of Cahokia would have lived in wooden homes with thatch roofs.

Further outside the central complex, a circular pattern of timber piles has been reconstructed. The locals have dubbed this structure “wood henge.” Archaeologists have theorized that the original wood henge was used like a surveyors transit to set the axis of city and to site secondary roads to mark important yearly events. Certain perimeter posts align with the rising sun at the Spring and Fall equinoxes and the Winter and Summer solstices. Mysteriously, the cities disbanded about 100 years before the arrival of Columbus to the New World. What lead to the abandonment of such an advanced urban culture? Depletion of resources, climate change, political upheaval and war have all been suggested as possible reasons for the decline. Sadly, these challenges appear to mirror the problems we face today. If history repeats itself, can we gain perspective of our current situation by delving deeper into the history of the Mississippian people?

Sorry, there are no polls available at the moment.
Tagged as:
travel
Share