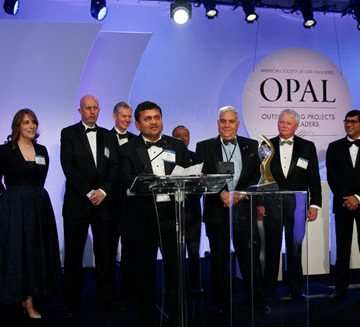 “It was a great team effort in building this project,” Parikh said. “And I am proud to be part of this project.”

The Second Avenue Subway project was selected among five finalists. The first major expansion of New York City’s subway system in more than 50 years, the project included building some of the largest caverns in North America for two of the new stations. The tunnel liner was not the typical steel reinforcing bars, but instead only steel and polypropylene fibers. With such deep caverns, the team used 3D renderings to detail the proper arrangement of the rebar.

“Anyone who has worked on the project has had people come up to them and say we improved their lives by shortening their commutes, or made it easier to visit their grandmother or get to a doctor’s appointment,” said Michael Trabold, P.E., M.ASCE, associate vice president, AECOM, and project manager. “It is gratifying to have a direct impact on people’s lives. It’s why we got into this profession.”

The team concept was a consistent topic in the speeches of the four 2018 Outstanding Projects And Leaders award winners:

• In education, Sharon L. Wood, Ph.D., P.E., F.ASCE, NAE, Dean, School of Engineering, University of Texas at Austin – for professors and deans whose careers are marked by achievements that direct or change the course of engineering education

“This is a shared award,” Zanetell said. “This is something we’ve all done together.” 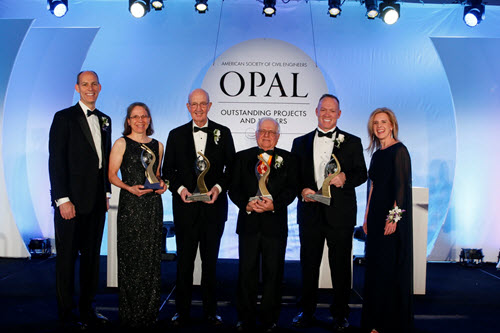 “Today’s a sad day for FIU and our community,” Chowdhury said from the stage. “In lieu of an acceptance speech, we ask for a moment of silence for reflection.”

Richard M. Kunnath, P.E., M.ASCE, board president of the Charles Pankow Foundation, received the Henry L. Michel Award for Industry Advancement of Research. The award recognizes designers and constructors who increase the awareness and participation of the industry in research advancement.

“It means a recognition for the work that the Foundation and the many volunteers who support it are accomplishing,” Kunnath said. “It certainly helps to highlight the importance of innovation to civil engineering. And to me personally, it’s an honor. I knew Henry Michel, and anything that associates me with a man that great is a wonderful thing.”