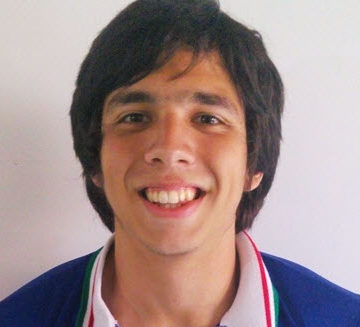 Gabriel Gerardo Rojas Perez is a young man with a lot going on.

There is work on his civil engineering and environmental engineering degrees at the University of Massachusetts Lowell.

There is his service with the school’s ASCE Student Chapter, his time as a calculus tutor, production duties at the local radio station, even a burgeoning semi-pro soccer career.

“One of the things you have to sacrifice a little bit is social time,” Rojas Perez said. “Sometimes I spend weekends without knowing what’s going on outside. It’s all about making a schedule and managing your time.”

Rojas Perez has been selected as one of the ASCE 2016 New Faces of Civil Engineering – College.

His ability to manage time began as a child growing up in Venezuela. His sister, Gabriela, is younger by 10 years, so he often had to cook her meals or help pick her up from extracurricular activities.

“It was built in me back home by my parents (Gerardo Rojas and Anelia Perez),” Rojas Perez said. “When I came here I started to improve those skills even more because I had to. Otherwise I wouldn’t be able to sleep.”

Rojas Perez moved to Miami in 2010 to attend St. Thomas University but transferred to UMass Lowell, attracted by the bachelor’s-and-master’s combo program at the school.

It wasn’t always easy, adjusting to a new surroundings, but Rojas Perez took motivation from his parents and family in Venezuela.

“That is how my father and my mother raised me,” Rojas Perez said. “You get through it. My mom beat cancer twice. Those examples keep you moving forward.”

He was drawn to transportation engineering in part by thinking back to the challenges in his hometown of Merida.

“The city is surrounded by mountains so it cannot expand. You have to deal with how to fix it,” Rojas Perez said. “I’ve always been passionate about how civil engineering relates to other areas. You have to deal with economic facts. If you’re moving this roadway, what’s going to happen to business that used to be in the old street? What’s going to happen to the people who were there?”

The move to Massachusetts was a happy one for Rojas Perez for recreational reasons, too. A lifelong soccer player, Rojas Perez earned a spot on the Greater Lowell United F.C. semi-professional club. He returned home last summer on a break from school and helped lead his Merida team to the nationwide city tournament championship.

“We played in the capital,” Rojas Perez said. “When we came back with the medals and the trophy it was a big party. It was definitely a great time.”