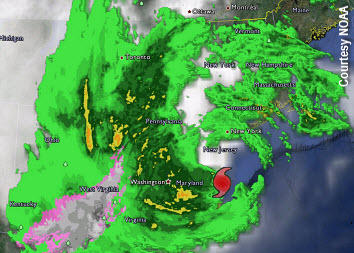 What passes for normal weather appears to be getting worse, with the U.S. facing a greater frequency of extreme storms likely to cause flooding, power loss, and wind damage. A symposium in April looked at uncertainties such as benefits and costs associated with repair, retrofitting, preparedness, response, and recovery in the Washington, D.C., area. Above, weather radar as Hurricane Sandy made landfall in the area, Oct. 29, 2012.

Sea level rise brought on by a changing climate and the increasing frequency of extreme storms have exposed metropolitan areas throughout the U.S. to both the long- and short-term threat of major flooding. In the nation’s capital, such flooding could inundate not only the National Mall, federal buildings, and monuments, but also businesses and homes. This was the conclusion of a study entitled “Towards the Development of Regional Risk Profiles and Adaptation Measures for Sea Level Rise,” published October 2012 in the Journal of Risk Analysis and Crisis Response.

The study concluded that even if the sea level rise is at the very low end of projections – just 0.1 meter by 2043 – nearly 43,000 people in the District of Columbia would be affected and damages could reach $2 billion.

In response to the study, officials from the District’s planning, environment, and homeland security departments sought guidance on how to more effectively manage these risks.

Bringing in experts and scientists from the National Oceanic and Atmospheric Administration, the U.S. Geological Survey, the U.S. Army Corps of Engineers, and academia, along with city officials, the symposium, “Risks of Extreme Storms Due to a Changing Climate,” held April 25 in Washington, D.C., identified risks to the national capital area from flooding and other major events based on risk analysis and management practices. Topics considered included spatial risk profiles; sea-level-rise scenarios; storms, impacts, and adaptation; inventories of assets in coastal areas and population centers; vulnerability assessments accounting for both climate change and related stressors; and risk-benefit-cost analysis of available options.

Sponsored by ASCE and the American Society of Mechanical Engineers, the symposium was organized by the study’s lead author, Bilal M. Ayyub, Ph.D., P.E., F.ASCE, professor of civil and environmental engineering and director of the Center for Technology and Systems Management at the Department of Civil and Environmental Engineering at the University of Maryland.

“The impact on New York and New Jersey [from Hurricane] Sandy gave us a realistic picture of what Washington, D.C. should be preparing for in the case of a direct hit from a big storm,” explained Ayyub, who is also a member of ASCE’s Committee on Adaptation to a Changing Climate and currently serves on the Board of Advisors to the ASCE Council on Disaster Risk Management. “So the symposium engaged city leaders to think in terms of what we call ‘smart planning,’ which starts with designing sustainable developments for 50, 100, or 200 years in the future by considering the use of land in areas of flood risk in a manner that will have the least impact to the city. Therefore, ‘smart planning’ will account for sea level rise as well as other impacts that will come from a changing climate.”

“As a civil engineer,” added Yumei Wang, P.E., F.ASCE, a geotechnical engineer and chair of the executive committee of ASCE’s Council on Disaster Risk Management, “you look at a bridge or the design of a building and you will be thinking about the loading conditions – wind load, water loads, earthquake loads, heat and traffic loads and so forth – and our codes are always a little bit behind.”

“So, what we are trying to do [with the symposium] is actually get ahead of that curve and develop a holistic risk framework that addresses not just a storm surge but also earthquakes, hurricanes, ice load, and other types of hazards such as biological hazards, or terrorism. And by doing that, civil engineers and decision makers will make better risk-informed decisions to improve the planning, design, and development of communities across the U.S.”

Ayyub says symposium organizers plan to produce a monograph to be published by ASCE to reach out to other communities.

According to Ayyub, “The overall stated outcome from this report is to identify the gaps, the needs, and opportunities in regard to managing flood risk which can help implement the District of Columbia’s sustainability plans by better accounting for a changing climate in the future.”

“What I hope comes out of this symposium,” noted Richard N. Wright, Ph.D., P.E., NAE, Dist.M.ASCE, who led the panel discussion on the impacts of changing climate on Washington, D.C., and is also a member of ASCE’s Committee on Adaptation to a Changing Climate and the Society’s Committee on Sustainability, “are officials from D.C. government gaining a better understanding of what the problems are that they face and what resources are available to help them deal with these problems. Also on a national level, people get a much better understanding of the meaning of these problems at the community scale where essentially everybody lives and works.”

Among the conclusions of the symposium was that decisions must be made in the near future by city lawmakers or city planners on how to reduce the impact of and adapt to sea level rise. While a do-nothing approach would likely lead to irrevocable losses, a short-term solution, like creating a small flood barrier, may give the city time to examine this challenge and produce cost-effective solutions. Long-term solutions that extend well into this millennium are also necessary. What participants came away with was a refreshing sense that the leadership of D.C. government was keenly aware of and willing to take steps to address pre-disaster planning.

“What was particularly rich is to come and hear things from the perspective of people in the Washington, D.C. community and see the richness of the concerns that you have there,” says Wright. “And to realize as civil engineers, we are concerned with flooding, wind resistance, and so forth, but may not have much to do to the vectors that threaten human health, so this symposium gives richness and a reality to these issues.”

“I am happy with the levels of engagement and intellectual diversity from scientists, planners, engineers, and decision makers – increasing the buy-in and enhancing risk-informed decision making,” concluded Ayyub. “We can address these problems of today and tomorrow through smart planning instead of reacting to each disaster, and therefore we will be more resilient.”