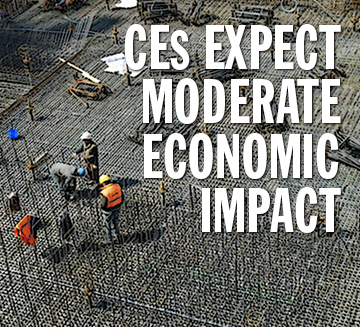 COMPARED WITH EMPLOYEES in other professions, ASCE members have fewer concerns regarding the short- and long-term viability of their companies in the face of the COVID-19 pandemic, according to the results of a recent survey commissioned by the Society and other organizations. And fewer civil engineering firms have had to let go of employees than other types of companies in the survey.

Overall, the survey results indicate that the civil engineering business may be better positioned than others to weather the turbulent market conditions resulting from the ongoing global economic slowdown.

The COVID-19 Impact and Implementation Survey was conducted by the research firm Industry Insights Inc., of Dublin, Ohio, from April 6 to April 9. A total of 1,542 respondents participated, representing 30 organizations. Of the respondents, 247 were ASCE members. Survey participants included manufacturers, distributors, retailers, professional service organizations, and academic institutions. Among overall respondents, approximately 66 percent identified themselves as being executives or officers within their companies, compared with about 25 percent of ASCE respondents.

Not as Many Negatives

ASCE members were asked to identify the top “negative impacts” that their companies had suffered to date. Top responses included “cancellation or delay of contracts,” at nearly 64 percent; “cash flow challenges,” at almost 52 percent; “hiring freezes,” at nearly 35 percent; “absenteeism,” at about 28 percent; and “supply chain challenges,” also at approximately 28 percent.

Unfortunately, ASCE members were more likely to work for companies that had an employee who had tested positive for COVID-19. Among ASCE respondents, 22.1 percent indicated that at least one employee within their companies had a confirmed case of COVID-19, compared with only 7.5 percent of total respondents.

ASCE members were asked to provide anonymous written comments regarding the effects of COVID-19 on their business operations. Many cited problems associated with working remotely, employees having to tend to children who are no longer in school, and clients suspending ongoing or planned projects.

“Municipal clients are putting projects on hold,” wrote one survey participant, who also cited complications resulting from “increased difficulty in getting plans reviewed and approved by city, county, and state officials.” Such officials “are slow to respond to emails [and are] no longer available by phone,” the participant said.

With local governments halting or slowing some types of construction amid the economic uncertainty, project funding may affect consulting engineers and construction companies, another respondent pointed out. “Only bond projects are a guaranteed revenue stream right now,” the respondent said.

Respondents offered mixed views of how COVID-19 was affecting field operations. “As a sole proprietor consultant, with clients in ‘essential’ industries, most of my work is ongoing,” said one participant. “In-person meetings are nearly nonexistent. Jobsite visits and inspections are [conducted] with social distancing rules in place.”

“I am unable to work,” wrote another respondent. “The work I do requires visiting buildings, interviewing owners or tenants about their concerns, examining the building, and reporting. I stopped receiving new inquiries in early March.”

In other cases, companies are modifying their normal project procedures. “Some project timelines are being adjusted,” one respondent noted. “For example, anything involving data collection is deferred for now. If the shutdown lasts long enough, we may have to find ways to continue projects with available data.”

How well clients, especially government entities, will be able to fund future projects was another common concern voiced by participants. “Large virus-response expenditures by clients leave them less budget for our services,” said one respondent. “Once the crisis is over, their need to service the resulting mid- to long-term debt will reduce, or could eliminate, their ability to engage us for planning services.”

“We are reliant on large public works construction projects,” said another participant. “While some of them are considered ‘essential,’ some of them have stopped, leading to loss of jobs for our inspectors and engineers. As far as recovery, these projects are dependent on state and local funds, which will drop due to lack of taxes.”

Such concerns are especially worrisome for smaller businesses, according to one respondent who identified their business as a small to medium enterprise. The “impact of the pandemic is going to seriously affect the business and the cash flow,” the member noted. “The sustainability for the year 2021 is worrying at the present time.”

(For more insight into how small civil engineering business owners are handling the slowdown caused by the pandemic, listen to ASCE’s Plot Points podcast series, COVID-19 Community Calls, episodes 13 and 21.)

—Jay Landers is a contributing editor to Civil Engineering.