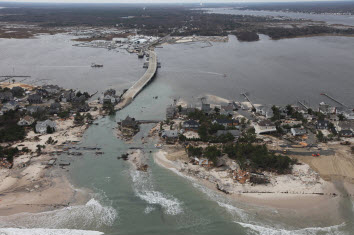 Six months prior to the flood summit, Hurricane Sandy unleashed its fury, giving new impetus to discussions on preventive steps.

One of the great challenges the U.S. faces today is recognizing the magnitude of risk posed by flooding and the difficulty of motivating the public and decision makers to make the investments required to reduce flood risk; whether it be emergency preparations, strengthening our flood systems, or finding new ways to reduce our vulnerabilities.

ASCE’s Hurricane Katrina External Review Panel (ERP) published a report in 2007 entitled The New Orleans Hurricane Protection System: What Went Wrong and Why. The report offered an assessment of why the city’s hurricane protection system failed and addressing the lessons learned and the fixes needed to prevent another catastrophic event from occurring in New Orleans or elsewhere in the U.S.

In January 2012, ASCE’s Board of Direction approved the formation of a Task Committee on Flood Safety Policies and Practices to investigate whether the lessons learned from Hurricane Katrina have been incorporated in the planning, design, construction, and management of water engineering resource projects in the U.S. The committee also was charged with developing the basis for needed changes in public policy and engineering practice related to flood safety.

Underscoring the urgent importance of the task committee’s work, Hurricane Sandy struck the Northeast in October 2012, exposing the nation’s vulnerability. According to the National Climate Data Center, damage in the U.S. from Hurricane Sandy was estimated at $71 billion.

“There have been hundreds of studies done on the lessons learned from Hurricane Katrina and in many cases nothing has really been implemented,” explained Robert G. Traver, Ph.D., P.E., D.WRE, M.ASCE, the task committee’s chair. “The committee basically wanted to look at what has been learned, what has changed, what has been working and also what have we not gotten to in relation to Hurricane Katrina and some of the other major floods. We wanted to take ASCE’s mission to protect life and property, and do everything we can to make sure that we reduce the risk from extreme events.

“Unfortunately, one of the things that we discovered is we are not always getting the best engineered solution.”

To help find those engineering answers, Traver says the committee convened a “provocative” Summit on Building a Framework for Flood Risk Management at the Hyatt Dulles in Herndon, Virginia, on April 25–26. The summit brought together 70 professionals with expertise and experience in the area of flood risk at the federal, state, and local level.

Attendees were presented with a series of 4 key “provocative” questions: what are our national overarching goals to protect life and property; what are the roles and responsibilities of the general public and all levels of government; what resources are needed to have an impact in our ability to deal with flooding; and what systems approaches are needed in terms of clear standards and coherent policies to address tolerable risk from flooding.

Following the summit, the committee will develop recommendations, strategies, and resources to shape public policy and advance the state of practice of flood safety. One outcome will be a “white paper” presenting the findings of the summit. Other educational and outreach products such as brochures or pamphlets may be considered.

Traver feels one of the overarching conclusions reached by participants in the summit was, “we can’t continue to address flood risk management in the U.S. the way that we are doing it.”

“I was very impressed that there was so much agreement [among the participants] on shared risk and shared responsibility, because this just can’t be the [U.S. Army] Corps [of Engineers] building a barrier wall around New Orleans. We can’t afford that,” says Traver, who is a professor and director of the Villanova Center for the Advancement of Sustainability in Engineering and the Villanova Urban Stormwater Partnership in the Department of Civil and Environmental Engineering at Villanova University. “I think we all realized it has to be solutions that are integrated into everything from the federal, state, regional, county, local, and individual levels.”

“I think one really compelling issue that I heard at this summit was the importance of communication with the public and government officials at every level,” added ASCE Executive Director Patrick J. Natale, P.E., CAE, F.ASCE, a participant in the summit. “We [as engineers] are very good at communicating with each other. But we need to be more effective with people in the community and with policy makers. We need their attention, and so I am optimistic that with this summit we have identified ways of understanding their concerns, better communicating the importance of flood risk management and, most importantly, getting action.”

“Two of the themes I heard at this summit,” he says, “were coming up with a means to effectively communicate the importance of flood risk reduction and taking positive steps towards reducing our flood risk. I think we all agreed that we need to identify ways to get people motivated to make a change to reduce our overall flood risk.”

The tone of the summit was set by its 2 keynote speakers: Phil Isenberg, previously a member of the Sacramento, California, City Council (1971–74), mayor of Sacramento (1975–82), and member of the California State Assembly (1982–96), and Gerald E. Galloway, Jr., Ph.D., P.E., Hon.D.WRE, Dist.M.ASCE, Glenn L. Martin Institute Professor of Engineering at the Department of Civil and Environmental Engineering and an affiliate professor at the School of Public Policy at the University of Maryland.

Isenberg, who was appointed by California Governor Arnold Schwarzenegger (R)to the Delta Stewardship Council, of which he was later elected chair, shared with the audience his knowledge of flood risk from the perspective of a public official and from the lens of the community and advised the participants to clearly shape their message in ways ordinary people would understand. Galloway, who has served as consultant to the president of the U.S., the U.S. Water Resources Council, the World Bank, the Organization of American States, and the U.N. World Water Assessment Council, says that with climate change we are likely to see flood losses continue to rise throughout the U.S. And while countries like China and the European Union are designing flood risk plans, the U.S. is falling behind and needs to do a better job of planning and communicating with the general public.

“Basically communication and understanding what is said are very important,” Galloway, a retired U.S. Army brigadier general, told the participants. “As a way of example, we as engineers use the term ‘100-year flood’ way too often, so people think [after having a flood] the next time there will be one is in 99 years; probabilities don’t work that way.”

“This summit has been amazing,” concluded Natale. “This was not the beginning or the end but the middle point in a process. The discussions from the breakout sessions were great but where we go from here is the last and most critical part. I am really anxious to see where the committee goes with all the information they have accumulated.”

“The summit definitely met and exceeded my expectations,” says Traver. “It did not point us to a single solution, but I think it is clear that the committee will have a lot of things to consider. One of the conclusions reached is that there has to be a new direction in the way that we do flood risk management.”