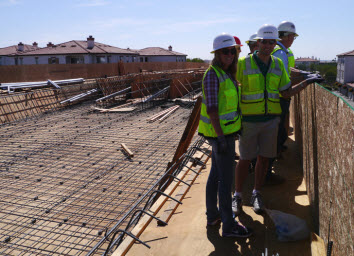 ASCE/CI’s Student Days included a field trip to the construction site of the new Rapid Transit Station on I-8 in San Diego, California. The site’s project manager gave a presentation on the complex challenges the contractor’s team faced, including constructing the station in a confined space between existing apartment buildings. Marvin Oey

Thirty-six civil engineering students from universities across the U.S. were given the unique challenge of competing in teams to produce the best bid for a city’s request for proposal (RFP) to reconstruct a collapsed sewer system as part of the ASCE/Construction Institute (CI)’s Student Days competition in San Diego, California, July 31-August 3.

The students were divided into 6 teams and asked to submit proposals to the City of Seattle, Washington, for a collapsed downtown sewer system that ran along a 2-lane roadway, under an historical park, and past a church.

The Student Days program, now in its fifth year, provides future civil engineers an opportunity to gain team building skills and to work on a real engineering construction problem under the careful guidance of ASCE/CI leaders and mentors. Another clear priority is to expose students to the true value of an ASCE membership by working directly with ASCE members and learning how ASCE has helped these seasoned engineers throughout their careers.

According to the fictitious RFP developed by the CI Student Project Challenge Committee, the cause of the sewer collapse was related to a combination of 3 things: an increase in sewer flows due to a growing population, an increase in runoff due to additional areas of commercial development, and tree root penetrations in historic Denny Park. The manholes and pipe soil in the damaged areas were deemed hazardous and necessary for removal in selected locations. The sink holes and cracking in the asphalt roadway at the sewer manholes were determined to stem from the leaching water and sewage causing soil heave and undermining areas of the roadway.

“Essentially the problem the student teams were addressing is that Seattle has a 12-inch sewer line that is no longer meeting the demands of the population,” says Gregory C.M. Moore, A.M.ASCE, Student Days co-chair along with Nicole Levari Koran, EIT, A.M.ASCE. “The proposal that they developed at Student Days was to upgrade it to an 18-inch line, but the challenge is you had to maneuver through about seven manholes along that half-mile stretch and replace those.

“But the hardest part they had to address was about 600 feet [of pipe] that runs directly through a public park. They had to figure out how to get through it causing the least amount of damage and without upsetting the general public, all the while coordinating noise ordinance and dealing with keeping public businesses open as they’re tearing up the roadway to replace the pipe.”

The proposals from the 6 student teams were judged by their design considerations, method of construction, quality control, safety, schedule, cost, and sustainability. Prime considerations for evaluating the teams’ proposals included traffic management and control; temporary shoring of trenches; excavation; removal and replacement of the existing sewer; reconstruction of the roadway, walkways, and historical Denny Park; removal of utilities; and preservation of existing features. The winning team did not get a prize, but they got bragging rights.

“I think the students got a lot of real-world civil engineering construction experience from this project that they didn’t necessarily get in school,” says Moore, who was part of the CI team that designed the Seattle sewer repair project for Student Days. “As a civil engineering student, you don’t learn a lot of things like the estimating and the scheduling of a project, so for many of them in attendance, this was the first time they had experienced something like this.

“Plus, they got a lot of experience working with different personalities – people who they’ve never met or worked with – and still be able to pull this kind of project together in a short amount of time.”

Tim Van Oss, S.M.ASCE, captain of the winning BTC Engineering Construction team, agreed. “We were all pretty surprised [we had the winning bid] because we all had such minimal experience in terms of what goes into bidding for a project and how detailed it has to be,” confessed Van Oss, who will be entering his senior year at the University of Buffalo, the State University of New York (SUNY). “We had only three days to work on our bid, and even then we spent so much time second-guessing ourselves.

“We had to figure out how to research particular information or find quotes from people, so we actually called a few companies to figure out how much they would charge to, say, excavate a road and how much time it would take, because we didn’t have any hands-on experience. So we learned how much experience plays into estimating a job [proposal] in the workplace.”

Moore says that unlike other kinds of student engineering projects, Student Days was developed to mirror how civil engineering teams work in real life. Therefore, the team captains selected their individual team members based on reading submitted biographies, resumes, and application letters, and then interviewing the prospective applicants. Students originally applied by submitting a video of themselves to CI. Students who wanted to be captains were asked to provide information showing their leadership experience through either their internships or as ASCE Student Chapter officers. This year, 50 engineering students applied and 36 were selected by 5 team captains.

“In college we always talk about writing your resume and making sure you put all the right kinds of things on there,” says Van Oss. “So I think Student Days also taught us how much emphasis there is on reading a resume and what we should put on there so it will get noticed. As the captain of the team, it really came down to having the right people with the right experience.”

“One of the primary goals for CI hosting this event is to make civil engineering students aware of their opportunities in construction engineering,” says Marvin Oey, Ph.D., P.E., M.ASCE, director of the ASCE Construction Institute. “It’s not all just a bricks-and-mortar and shovel-in-hand type of industry; it’s a problem-solving industry where you have to use a lot of your skill sets. You learn from civil engineering to accomplish some very challenging problems.

“Plus, it’s an opportunity for students, our future leaders, to develop their networking skills early on, because these teams are all primarily composed of students who have never met each other, and are from across the country.”

To complement the project, the students took part in a number of other activities, including a field trip to the construction site of a critical Rapid Transit Station on I-8 in San Diego. Visiting this highly complex project demonstrated to students the issues civil engineers face in the real world. The I-8 Rapid Transit Station faces challenges such as a confined space between existing apartment buildings and building a bridge over the busy I-8 without disrupting traffic. Here the students heard a presentation from the project manager to better understand things such as how to conduct the construction phasing, manage operations for pouring the concrete, coordinate construction with the public, manage traffic, consider the construction pros and cons in putting in the access ramps, and deal with a variety of conflicts on a daily basis.

After the job site tour, the students were taken to the San Diego Zoo for a team-building scavenger hunt. In the evening after dinner, the participants conducted what they called speed networking, which provided the students with an opportunity to talk individually with civil engineering professionals and company recruiters for 10 minutes each while rotating around the room.

“I believe the students who came to this event are going to have a great impact in whatever company that they go to; they’ll stay with ASCE; and they’ll continue to learn throughout their careers,” concluded Moore. “There’s no doubt that we’re looking at all of them being great civil engineers of the future.”