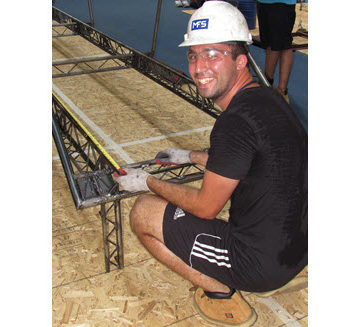 The Lafayette College steel bridge team turned heads at the 2018 nationals this year with their speed, their ingenuity, their teamwork, their… rain gutters?

Easton, PA-based Lafayette took first place in the overall standings at the 2018 National Student Steel Bridge Competition, hosted by the University of Illinois at Urbana–Champaign ASCE Student Chapter. And yes, rain gutters played a crucial role in their victory.

“We brought along with us two 13-foot-long rain gutters,” said Lafayette senior captain Travis Shoemaker. “I think everyone was giving us a whole lot of funny looks about our rain gutters, but they were probably the most innovative tool we came up with.”

The Lafayette team set up the gutters on an incline to function as chutes, allowing members to transfer bridge parts to each other across the competition’s (imaginary) river. This allowed the team to build along the larger, more open side and run from the shorter side, making for a faster, more efficient process.

Interestingly, scoring the fastest time wasn’t their objective. Neither was aiming to build the lightest bridge. Lafayette eschewed strategizing for individual category wins in hopes of claiming first place overall in the competition.

Once again congratulations to Lafayette College for over all winner of the 2018 NSSBC! Watch how they built their bridge! Can you say innovative?

“Our analyses led us to see that there wasn’t a particular side you wanted to be on in terms of the various other awards,” Shoemaker said. “We didn’t want to be the lightest team. We felt like the added weight was worth it in our overall score. We actually wanted to have a heavier bridge. So we compromised speed and weight for stiffness and structural performance.”

“I think during the ride back home is when it finally sunk in,” said Shoemaker, whose team had a 13-hour celebratory drive back from Illinois to eastern Pennsylvania. “It’s something that we had been talking about and working for the whole year. So it was almost just strange to think that we were finally here, and we had accomplished what we had been talking about all year.”

The rain gutters weren’t Lafayette’s only innovation at the competition.

The team decided early in the school year – albeit after what Shoemaker termed “heated debate” – that it would construct a truss bridge. It was an ambitious plan not without risk, because the new rules this year forbade temporary piers during construction.

One of the most challenging aspects of the steel bridge competition is how the rules and regulations change from year to year. The rules committee keeps teams on their toes. What worked for one team this year may not work the next year.

But the Lafayette students thought they could develop workarounds for their tied-arch bridge design.

One, they built the bridge girders first and put the diaphragms in early, so that the structure stabilized quickly during the construction process.

Secondly and maybe most notably, they used 17-foot-long thin-walled tubes to hold the structure up during construction. The interconnected tubes formed what they called “birdcages.”

“A cage for a very long, slender bird,” Shoemaker laughed. “That gave us the ability to connect tools to the base at the very beginning. So we didn’t have to have someone stand there the whole time as a human pier.”

Add in the rain gutters and it was an impressively innovative bridge production from the Lafayette squad. Which really is the whole point, right?

It’s not a coincidence that the team’s motto over the course of the school year was: Every decision must be an engineered decision.

Also not a coincidence – all nine graduating members of the team have already secured full-time civil engineering work along the East Coast, starting this summer.

“Having a project like steel bridge that’s a year long and has such a well-defined set of rules, it really gave us an opportunity to do a level of design and analysis that you typically don’t get in an undergraduate experience,” Shoemaker said. “The project goal all along wasn’t simply to get an answer. Our goal really was to analyze, test, and design the best possible answer.

“And through that process, we had the privilege to practice a lot of skills that you wouldn’t get in other classes.”

See the complete results, standings, and photo galleries from the nationals.