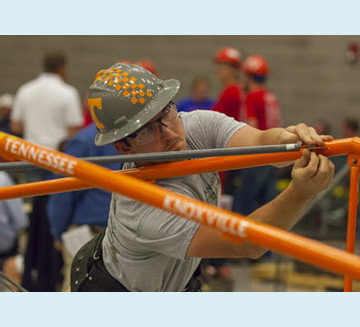 The University of Tennessee works to assemble its steel bridge at the 2016 national competition. PHOTO: T. Bart Quimby

Yet Frank Hatfield is busy at work, drafting new competition rules for 2017.

“We have to start on it right now,” said Hatfield, Ph.D., P.E., M.ASCE, chair of the rules committee. “I’ve got a bunch of concepts from the committee.”

Hatfield has overseen the rules for the NSSBC since there was such a thing.

“I believe in term limits, but I haven’t term-limited myself,” joked Hatfield, who retired in 2001 from the engineering faculty at Michigan State University.

“But it continues to be fun. The contest keeps growing. Every year we get more entries at the regional level.”

ASCE and the American Institute of Steel Construction cosponsor the event each year.

Hatfield’s Michigan State squad hosted and won the first national title – back in 1992 – after five annual competitions that included only Michigan schools.

The first national competition, open to all schools, featured 13 teams. This year’s event brought together 48 student teams from across the world – mostly the continental United States but also Puerto Rico, Mexico, four from Canada, and a team from Tongji University in Shanghai, China. 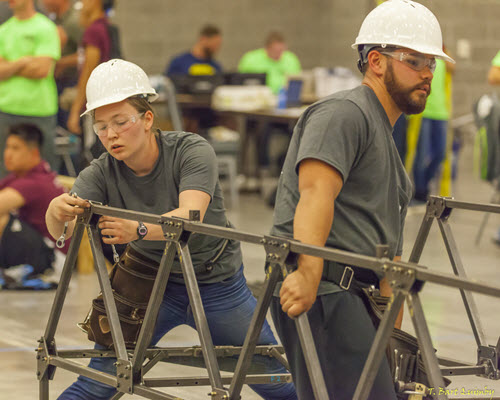 One bridge assembly in the 1987 competition took two hours and 23 minutes.

This year, the team from the University of Wisconsin-Platteville constructed its bridge in 2.62 minutes.

“That [1987] bridge had far too many parts, far too many bolts,” Hatfield said. “It didn’t fit together well. I think they mixed up some pieces. We’ve come a long way.”

Hatfield said the faster times and lighter bridges aren’t simply due to rules changes; they’re the result of a natural and gradual learning process.

“When we do our display judging at the contests, people are judging and rating, but the students are walking around, too, and getting ideas,” Hatfield. “So you’ll see a lot of copying. A strategy that works well one year will show up the next couple years. But that’s fine. That’s how engineering develops.

“People are looking for good designs – things that don’t work, things that really work well – and then they incorporate it into their ideas. In that sense, it’s very realistic.”

Hatfield is the unofficial steel bridge historian. He presented a history of the competition at the 15th national.

And as the various college teams look forward to next year’s event, hosted by Oregon State University, Hatfield will push this summer to have another new set of rules ready by the start of the fall school year.

“When I was teaching engineering, if I was really working, I could influence a couple hundred students in a year. Now in a year I impact about 2,000. It’s great,” Hatfield said, before adding with a laugh, “These rules are read all over the world. It’s my most successful publication.”