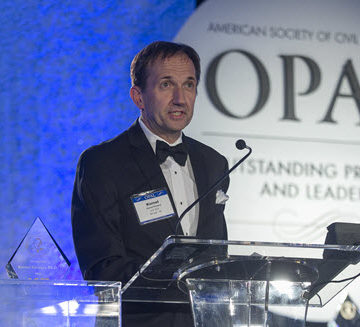 The researching world looks a lot different now than it did when Kornel Kerenyi was in school.

And that’s just fine with him.

“I went to high school in the early ’70s. We still used the slide rule,” said Kerenyi, hydraulics research and development program manager for the Federal Highway Administration. “Now we have computer modeling. We have these advantages which researchers prior didn’t have. You actually grow with your work. If you’re in research, you’re always involved with the newest technologies.”

Kerenyi, Ph.D., M.ASCE, hasn’t merely kept up with the latest tech – he’s pushed his hydraulics research lab to the cutting edge, and his work earned him the 2016 Henry L. Michel Award for Industry Advancement of Research. He received the award at the 2016 OPAL Awards Gala.

Trained as a bridge scholar, Kerenyi has focused his research on bridge foundation design for flooding and scour. He brought the techniques and technology he developed in Switzerland during the 1990s with him to the United States.

His work in the lab has created a device that can go into the field and assess the erodibility of soil at bridge sites. “In conjunction with the computer modeling we can then compare how these forces interact,” Kerenyi said.

All of which is a long way from the slide rule.

“We just had to grow with the equipment and learn it for this position that I’m in right now. Fortunately, I have a very good team supporting me,” Kerenyi said. “I’m so proud to work with such a great team. All these achievements are possible if you have a very, very good team working with you.”