StartUp, Part 2: Learning to Be Profitable 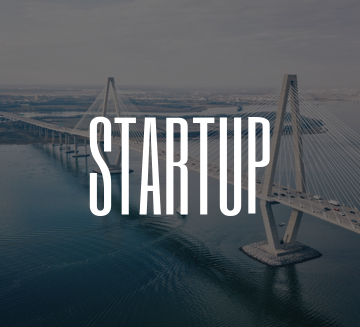 And here, in an ASCE News series, Howell gives his fellow civil engineers a firsthand look at what it takes to start your own business and how to make it work.

Life is different these days for Mike Howell since starting his own business, Arrow Engineering, last summer.

For starters, his commute time is way down. The morning trip to the office now consists of walking to the desk in his living room.

He’s also liable to find little surprises in his work. Like when he picks up the graph paper he used for some calculations the night before and finds it covered in doodles and drawings by his 4-year-old daughter.

All of which is very cool.

“There have been a lot of moments of just being in awe, like here I am, I’m really doing it,” Howell said.

“Just being able to enjoy the newness of it, sitting at my living room desk. It’s kind of cool to be here right now and creating things as I go.

“I’m never going to experience this feeling again, where everything is new and I’m jumping into the deep end with both feet.” 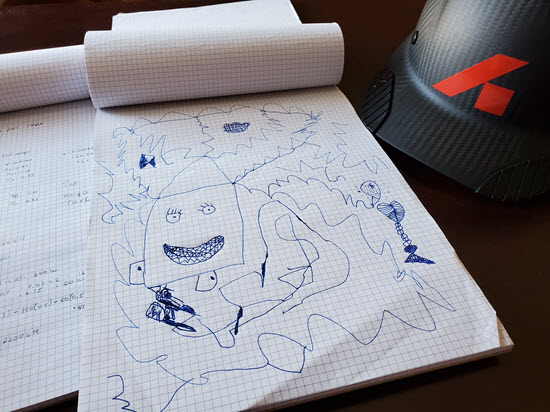 Mike Howell’s work occasionally has a new look – courtesy of his daughter’s drawings – since he started his own business, Arrow Engineering.

When last we left our entrepreneurial hero (read StartUp Part One here), he was three days into this business journey of a lifetime, designing the company title block and letterhead.

Seven months later, the good news is twofold: Arrow Engineering is still in business; and, in fact, turning a profit.

“The first two months almost every project I did was for a new client who had just sort of fallen into my lap, essentially,” Howell said. “Yes, I’m a startup engineering company, but I’ve been given opportunities that rival established firms, with some of the projects that I’ve been able to get involved in and work on. I’m very thankful to have been given those chances.

“It’s not like I’m just picking up all the scraps. I’ve got some really good, legitimate projects to work on.”

The work certainly helps. So does Howell’s plan from the jump to limit upfront costs.

He’s focused on the structural engineering itself, even if that means working long days and weekends, often doing a lot of the detail and drafting himself.

“Would it be nice to be set up in an office and have a staff to do that? Yeah it would, but I don’t think I would’ve traded the up-front cost,” Howell said. “It’s something that I’m proud of. I started small and I stayed small. I’m not overloading myself with expenses.”

OK, he did splurge a little and get himself a new truck. But that’s part of establishing legitimacy, right?

While he has done a lot of work on the public-relations front, designing the company website and sharing his entrepreneur story, he figures he’s still spent about 60 percent of his time on the engineering work.

“I was doing a lot of the same stuff at my previous company, in terms of setting up proposals and scoping out projects, while also trying to do the drafting and the designing,” Howell said, noting that the move hasn’t been quite as big an adjustment as some might guess.

“Engineers are so much better equipped than they realize to be business professionals. A lot of what you do is independent. You’re a structural engineer. It’s your opinion and your knowledge. So essentially, even if you’re working for another company, you’re kind of your own business anyway.

“Even the softer skills. I can’t tell you how many things I learned in business school that because of my engineering background I thought, ‘Well, no kidding, this is easy.’

“Strategic thinking, presentation skills, simply being able to convey your thoughts – these are big business skills that civil engineers already have.”

As well as everything has gone, Howell readily admits that he looks back and laughs at the version of himself who thought he knew what he was getting into last summer.

There are the multiple insurance policies to purchase – “Why do I need worker’s comp?” he asked. “If I get injured, I’m not going to sue myself!”

The navigation of relationships between clients in the industrial, commercial and residential world.

The ongoing balancing act working multiple projects at once.

The realization that he was going to have to go back and recreate 15 years of templates and details for his design drawings.

“I’ve taken this opportunity to create them the way I always wanted them to be created,” Howell said. “That takes a little bit more effort and a little bit more time. But to be honest, it’s been the biggest benefit to all of this. It’s forced me to go back and look at every single thing I do and ask, ‘Is this the right way?’

“It’s made me a better engineer.”

Howell earned his master of business administration degree from West Virginia University, a program he very much enjoyed, so it’s not surprising that he’s taken to the business aspects of his new life.

“I love the business stuff. I love setting up the projects, the marketing, the networking,” Howell said. “That’s been the most fun part, the freedom to explore the business aspects.

“It’s really just enjoying the relationships. Business is not anything more complex than forming the right relationships that can support you and grow what you do.”

He said aspiring entrepreneurs can manage even if they don’t love the business side of things as much as he does. There may be a hard ceiling on your business, though.

And while he loves getting those doodles and drawings from his daughter on his calculations, his vision for Arrow Engineering extends well beyond these first seven months.

“If you want to go into business for yourself and just take the work that comes in, you’re already equipped to do that. You can do that,” Howell said.

“For me, that’s not my aspiration. I don’t want to be sitting in my living room forever.”

Mike Howell will be speaking at the ASCE Structures Congress 2020, April 5-8, in St. Louis. Learn more.

Tagged as:
entrepreneurstarting your own civil engineering firmStartUpstructural engineering
Share