Makes for a nice song title, but in reality… Depends I suppose on your definition of the heavens. Anyone who has visited the beautiful alpine heights of Switzerland may argue that the infrastructure exists, and it’s much more convenient that a plain old stairway.

While visiting Luzern, in German speaking Switzerland, I embarked on a day-long round-trip voyage up to the heights of Pilatus. The mountain is named after Pontius Pilate. It’s an odd but fitting name, since Luzern was also the site where a Roman General refused to put to death a commune of Christians and himself converted. That story is commemorated along the historic covered bridge in the center of town. From the north bank of the river, the bridge monument and mountain massif beyond create a magical Kodak moment. 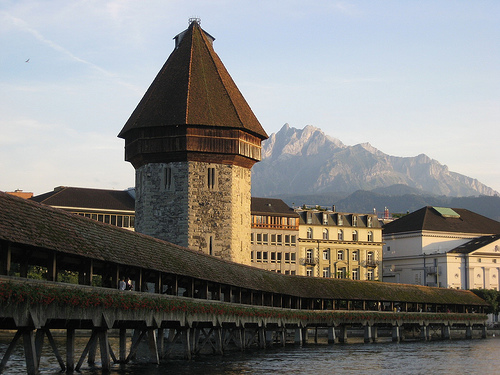 In the morning, we embarked on a five hour voyage to the summit of Pilatus. The tour is ominously advertised as the passage of the red dragon. The trip began by boat which ferried us across lake Luzern. Less developed than lake Geneva’s shores, the rustic hillside is still home to hundreds of cozy-looking chalets. The second leg of our trip was made by cog-wheel train. I’m not exactly what defines a cog-wheel train, but I do know that they are used to climb steep slopes. In fact, the one up the back face of Pilatus is the steepest train of its type in Switzerland. The car, even when docked in the station, was constructed on a 45 degree diagonal, so that the seats would be comfortably level while ascending the slope. As we climbed steadily into the serene and surreal mountain landscape the hustle and bustle of Luzern seemed a distant memory.

Even Roxy, our dog, was relaxed. She was able to join us for all legs of the trip up Pilatus – boat, train, cable car and ski lift, no problem in pet-loving Switzerland. While I marveled at the infrastructure, I’m sure she was more impressed by the curiously clanging cows high up on the mountainside.

Two hotels and several restaurants provide hospitality at the summit of Pilatus. Several short hikes up to lookout platforms are worth the effort. One even leads through tunnels in the rocky mountain top. Roxy practically pulled me up the slick stone steps, welcome assistance on the way up – not so helpful coming back down. I truly felt like I was standing on a cloud; the view of the alpine countryside was breathtaking. To complete the round trip tour, we had to descend the steep face of the mountain – pretty much a straight drop for several hundred feet. A lonely cable car, cutting through wisps of cloud lowered us back down to the city of Luzern. The voyage was successful.

Boat, cog-wheel train, cable car, ski lift, bus… The infrastructure in place for visitors to Pilatus is quite impressive. If you’re looking to ascend to the heavens there is perhaps no more comfortable route than the one through Luzern.