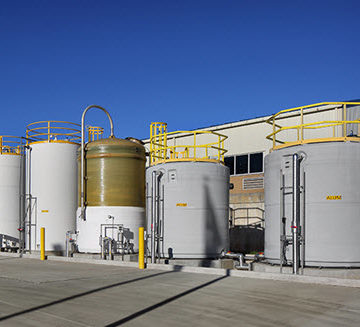 Located in the Normandy Shores neighborhood, the plant has been operational for decades, but needed upgrades to better serve the needs of the growing community. The project team incorporated several sustainable features into the project design. These attributes included reducing operational noise, preserving locality through aesthetics, and adding safety improvements for workers and residents.

Aesthetic upgrades were especially important with stakeholder input taken into consideration. The old structure consisted of a series of large pumps on a dock, which was an eyesore to the community. The new structure, similar to a lighthouse, fits in with the local character and reduces noise pollution from the pumps.

Another top priority for the project team was public and plant-worker safety. The original plant used a gaseous form of chlorine in the water treatment process. The toxicity of the gas could have negatively affected the health and safety of the public and workers. The team has switched to a liquid sodium hypochlorite, generated on-site, that is safer to transport and eliminates many of the health and safety risks associated with chlorine gas.

The Seneca Water Treatment Plant is estimated to use 30 percent less energy than the industry standard. The significant energy savings were made possible by removing the old sludge clarifier and the redundancy in water flow, and replacing the sludge press with a screw press.

To make the plant more accessible for public education about water treatment in Seneca, the project team is creating a Water Educational Center. The facility will be open to schools, community groups, and the public to tour as they learn about the plant’s role in the community.

The City of Seneca and Seneca Light and Water worked closely with Harper Corporation; Hulsey McCormick & Wallace; and Goodwyn, Mills and Cawood to deliver the award-winning project.