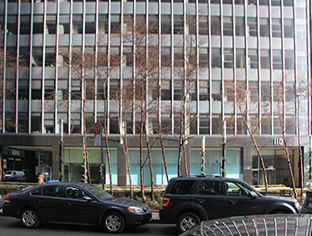 In an effort to learn how ASCE’s standard 24 (Flood Resistant Design and Construction) can be modified to reduce damage from similar events, a reconnaissance team was sent to New York City after Hurricane Sandy to assess the performance of various buildings. One of the buildings investigated was 110 Wall Street. James Cohen

In December and January the Structural Engineering Institute (SEI) sent a reconnaissance team to the southern end of the New York City borough of Manhattan to investigate and document the performance of several buildings affected by the storm surge and flooding from Hurricane Sandy, which struck the city at the end of October.

The team’s mission was to investigate the damage with a view to revising ASCE’s standard 24 (Flood Resistant Design and Construction) so as to reduce damage in urban environments. As part of their trip to gather information, the members of the team surveyed high-water marks and conducted interviews with building occupants, property managers, and landlords.

“The purpose of the mission,” explains William L. Coulbourne, P.E., M.ASCE, one of the leaders of the team and the director of wind and flood hazard mitigation in the Rehoboth Beach, Delaware, office of the Applied Technology Council, “was to look at the impact, the effect of a major flood event in an urban area and to see what we would learn and apply it in some way to the engineering standard that we have for flood-resistant design and construction, which is ASCE 24.

“Like many other civil engineers, I have been to lots of hurricane events and seen the effects of coastal and river flooding, but in none of those cases have we really had much of an opportunity to focus on the effects of flooding in an urban environment and the impacts on what I would call the big buildings—commercial office buildings, residential high-rise condo or apartment buildings, communications centers, or a hospital.”

From December 18 to December 21 the team examined the buildings in lower Manhattan at 24 State Street, 1 Whitehall Street, 110 Wall Street, and 80 Pine Street, and on January 15 its members returned to the city to investigate 1 New York Plaza. In the coming weeks, the team plans to investigate other buildings and perhaps a hospital in lower Manhattan.

“Aside from going into buildings,” adds James Cohen, P.E., M.ASCE, the other leader of the team and an associate principal in the Edison, New Jersey, office of Arup, “the team walked in along the . . . most badly affected area of lower Manhattan, starting in Battery Park around to the Brooklyn Bridge [and] looking at what had happened to buildings along the way, which gave us a very nice overview of the situation. We saw new buildings and buildings dating back to the late 1800s. The choice of buildings [that we investigated] was based on prior familiarity and likely area of damage and accessibility. We did have difficulty getting hold of many property managers, owners, or landlords, which is why the number of buildings visited thus far has been limited.”

When Hurricane Sandy hit lower Manhattan, storm water poured into the Brooklyn Battery and Queens Midtown tunnels. It burst into subway stations and even cascaded into the construction site at Ground Zero. According to New York City’s Office of Emergency Management, the water level rose to a record-breaking 13.88 ft at Battery Park, at the southern tip of Manhattan. (The previous record, 11.2 ft, was set in 1821). According to the utility Consolidates Edison Company of New York (Con Edison), which provides electricity to the area, most of the city below 39th Street was without power for days after the hurricane.

“Basically, we began our investigation by talking to either the building maintenance people, the building manager, or one of his or her staff who could walk us around, show us what happened, and what the impact of flooding was in order to give us a sense of what the issues are,” says Coulbourne. “For example, 110 Wall Street is a twenty-eight-story commercial office building with a large FedEx office on the street level. The building had a one-story basement, and so what happened was the entire basement filled up with water to the point that is was almost five feet deep in the lobby area. Therefore, everything below the first floor got inundated with water; all of the building’s equipment that was down in the basement obviously got impacted, including all the electrical equipment and the fire pump motor that runs the fire protection systems. However, the generator and the fuel oil tank for the generator had been installed on the twelfth floor, so they did not lose their capability for emergency power, which is certainly one of the lessons that was learned from this event.

“The building still had emergency power, but it had a very small fuel oil tank for the generator—about two hundred seventy-five gallons, and it is up on the twelfth floor. They only had enough power to run one of their elevators using their small oil tank, so what they had to do was bucket-up fuel oil from fifty-five-gallon drums to fill up that tank to keep the emergency generator running. When we saw the building in December it was still out of service, and [the landlord] was not sure what they were going to do with the building.

“The piping and its controls were all in the basement so that all got impacted and it’s all been replaced, so I think they are all back in operation in terms of having steam [heat] in the building. But their electrical control systems were all in the basement, and since this storm surge had salt water from the East River, there was salt water in all of their electrical gear, and so that is something that I think they will have to totally replace.”

Cohen says it was not very difficult when inspecting the buildings or walking around in the neighborhood to see the level the water surge had reached.

“Once the water breached the door or loading dock, if there was a basement in a building, [the water] went up to the ceiling; if it went into multiple basements, the water rose to multiple ceilings,” observes Cohen. “At the lobby or street level, we observed waterlines up to about four feet. Even though all the buildings we inspected were facing or near the East River, there was nothing that indicated that there were breaking waves, and there were no major impacts from floating debris, which is surprising.”

Among its other findings, the team, Cohen says, saw that “the garage or overhead doors were pushed in, [but] the surrounding concrete frame and the steel structures had no damage, and floodgates which were engineered did not fail, although they were overtopped. Paving slabs which were not securely anchored were lifted up, light materials—meaning anything that could float, including large concrete planters—once they were surrounded by water became buoyant and moved. A glass wall was broken and breached by the water at 1 New York Plaza, but we don’t have enough information as to how strong that glass wall was.

“Breaches mostly occurred at low water levels, so the water could be only two inches to three feet above your threshold on the door, and that is enough for the water to get downstairs to the basement. Loading docks were a very popular entry for the water. Con Edison conduit points of entry into the building were also sources of water entering the building, but no one has indicated this as a major source, particularly as sump pumps may have been able to cope with the volume of water that would come through the utility entries, even though they were not properly sealed.”

Once the members of the team have inspected all of the buildings on their list, their findings will be published by ASCE as a committee report.

“We will write a report which will articulate our mission, what we found, and whatever the conclusions and recommendations we have for ASCE 24,” says Coulbourne.

“There is nothing that we saw that shocked us,” concludes Cohen, “But I think ASCE is in a good position to be in the lead to have a more proactive approach, [to make more of a] predisaster effort. . . . What I mean by that is [that] the issue of resilience is something which we need to address as a society, not just mitigating immediate damage to a spot location. The owners [of a building] may not be as interested in traditional disaster mitigation but at how quickly they can recover operations, not how they can stop the water from getting in, like a floodgate or a sandbag.

“So I think looking at that overall, we should be looking at this issue from a multihazard, multidisciplinary approach and the resilience of a building in the built environment, rather than focusing on only strength and resistance.”