Money was tight for Fernando Ceballos growing up in Brownsville, Texas, a city on the Rio Grande River right at the southernmost tip of the state.

At home, it was just him, his mom, and his little brother, so when rent came due, 8-year-old Fernando did what he could to pitch in.

“I was knocking on my neighbors’ doors, selling tacos, tamales, slices of cake, things like that,” Ceballos said. “My mom made me an entrepreneur at an early age. I thought of it as, ‘Well, I’m just poor and we need to pay the rent,’ but she was showing me what business development was, what marketing was, and the importance of building relationships.” 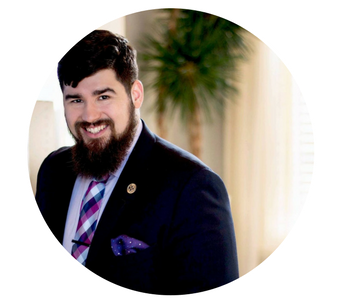 Ceballos carried that work ethic and those solutions skills with him as he grew up, proudly becoming a first-generation high school graduate, a first-generation college graduate, and now a project engineer for Pape-Dawson Engineers in Plano, TX, working in the land development department on commercial and residential projects. ASCE has honored him as a 2018 New Face of Civil Engineering.

Ceballos’ story would be remarkable enough if the ending was simply all about his own success. But that’s not it. Ceballos has become a powerful voice in the community – volunteering with both ASCE and the Society of Hispanic Professional Engineers – inspiring and mentoring youth, especially those in underserved areas.

“When I was young, I would’ve liked to have had a mentor or just a professional figure to ask for advice,” Ceballos said. “So I kind of bought into that whole idea of becoming the person I wish I had growing up.

“I hate knowing that people are throwing away potential or not fulfilling their calling because they’re scared or they don’t know what route to take or they don’t even know what questions to ask. So I try to share whatever I’ve learned, share it with my community and let them learn from my experiences.”

So how did Ceballos get here without a version of the 27-year-old him to act as a mentor in his life? In his words, he pieced it together. He credits his mother, who worked three jobs his entire childhood, his grandmother, his uncle (an engineer in Mexico), Project Lead The Way high school teachers, and sports.

Ceballos was an all-state chess player in middle school and even competed in a national tournament in Arizona. He also excelled at football, playing all three positions on the offensive line, during high school. All while keeping up with his Technology Student Association competition projects, placing on the regional, state, and national stages.

“Chess really taught me to slow down and think about the endgame and where I wanted to go. You have to think a few moves ahead,” Ceballos said. “With football, the coaches helped me develop my character, putting in the work during practice so you could succeed when it was gameday. The coaches were father figures.”

Ceballos studied civil engineering at Texas A&M University, where he served on numerous leadership boards for several student organizations. He is currently a member of both ASCE’s Committee on Pre-College Outreach and the Committee on Diversity and Inclusion. He also serves as SHPE’s Region 5 vice president, overseeing 45 student and professional chapters. 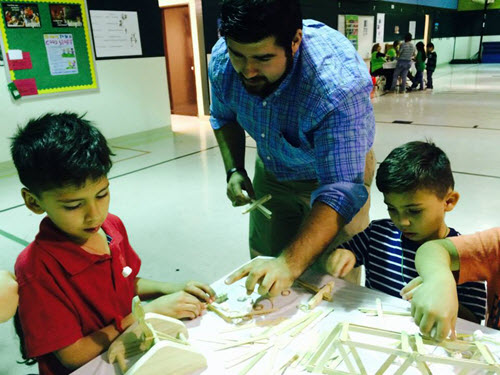 “I hate knowing that people are throwing away potential or not fulfilling their calling because they’re scared or they don’t know what route to take or they don’t even know what questions to ask. So I try to share whatever I’ve learned, share it with my community and let them learn from my experiences.”

Ceballos talks with students at career day functions or in classroom visits every few weeks. His journey from selling tacos door-to-door to engineering leader is, you can imagine, one that resonates with his audiences.

“We always say, ‘See it to be it.’ If the students don’t see themselves in the speaker, it’s very hard for them to be convinced,” Ceballos said. “That’s why I’m so passionate about wanting to create more leaders in the engineering world. Typically, we engineers are more focused on the technical side, and we sometimes have a deficiency in sharing what engineering is all about – which is making the world become a better place.

“The more we can help our engineers become better public speakers and better leaders and gain that influence, the easier it’s going to be to inspire the future leaders of the country.”

Ceballos is well on his way.

“I tell them to look past the stereotypes. Don’t let other people’s expectations for you become your reality,” Ceballos said.

“I want to fight stereotypes for people with dyslexia, or Hispanics, or whatever background they come from. Anyone can become whatever they want to become. Engineering, it is all about solving problems.

“That is what I’m bringing to the table.”