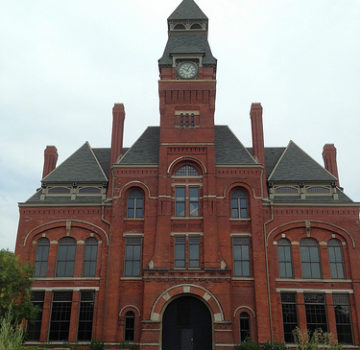 Chicago owes its status among US cities to the railroad. In 1848, the first train chugged along five miles of track bringing two cars of wheat into town. At the time, Chicago had only about 14,000 citizens. In just two years the population doubled. A hub for lines heading east and west, the railroad fueled the city’s economy for years to come.

No Chicago neighborhood is more closely linked with railroad history than Pullman. Mr. George Pullman believed that happy workers would be more productive, so he developed a planned community with residences and public services around his eponymous Pullman Palace Car Company factory. The town was constructed on 300 acres south of Chicago between 1881 and 1894.

Mr. Pullman and his architect, Solon Spencer Berman, took pains to construct a variety of housing configurations while maintaining a common architectural style. The row houses were comfortable and contained indoor plumbing, gas, and sewer – not a given for the time. In addition to the factory and residences, the town included a hotel, a public market, stables, several parks, unique churches, a school, and utility buildings. The surviving structures are all landmarks in their own right.

The Pullman factory thrived until a depression in 1893 reduced demand for the luxury train cars. Eventually George Pullman was forced to cut wages and lay off workers. With lower incomes, the workers could not afford the rent and went on strike in 1894. Following George Pullman’s death in 1897 the company sold the houses to their inhabitants. Chicago annexed the community in 1889.

Eventually the manufacturing plant was closed and some of the parklands were paved over. In the 1960s the entire neighborhood was threatened with demolition to make way for a large industrial park. A group of citizens organized to protest the demolition and promote preservation of the architectural landmark. Following these efforts Pullman was designated an Illinois Historic District in 1969 and a National Historic Landmark District in 1970. The community is now pursing recognition as a National Historic Park and is among the suitors for President Obama’s Presidential Library.

I visited Pullman earlier this summer. The neighborhood isn’t a typical tourist destination, and it carries some of the stigma associated with being located on the South Side of Chicago. My first impression of Pullman, driving west from the Dan Ryan Expressway, was something of disappointment from seeing the near-ruins of the few remaining factory warehouses. As we turned to get a closer look of the main factory hall, however, it was possible to see the extreme effort that had recently taken place to restore the building and its stately clock tower. Unfortunately the site was not open on the day of our visit, and it was obvious that much more investment would be required to open the factory site as a public venue.Our next destination was the south Pullman neighborhood on the other side of 111th Street. Visitors are greeted first by the beautiful Hotel Florence constructed in the Queen Ann style. It once had about 60 guestrooms, but the hotel has long since been vacated. The next landmark likely to draw the attention of visitors is the Greenstone Church. Serpentine limestone from Pennsylvania gives the building its namesake. A United Methodist congregation still holds services in the church. It remains an anchor to the community.

From the steps of the church, one is compelled to venture further into the neighborhood by the tree-lined streets and row-house architecture. Miraculously only 3 properties within the original 616 address have been lost. And after 100 years of private ownership, the architectural intent of the original design is still apparent. The homes are in the Queen Ann style, but the use of local materials and the purpose built relationship to the Pullman factory provide a unique architecture.A few months after my visit, I attended a presentation by preservationists who had surveyed the town and produced a restoration guide to help the private homeowners. They identified 102 different variations to the row-house facades. There were 20 different types of original doors used and 18 different porch configurations. The preservationists poured over historic photographs to determine the diversity of construction but were also assisted by the fact that nearly a third of the homes retained at least one original door, window, or porch.

The hope is that the private homeowners will continue to restore their homes to the original period construction. This guide, which among other details, comes complete with details for fabricating the historic windows mullions, should assist that goal. Visitors can monitor the progress at the annual Pullman House Tour. It’s one of the longest standing open house events in the country.

Despite the many existential challenges faced by Pullman, the neighborhood remains quite vibrant. Perhaps aided by the architectural brilliance of the place, the residents of Pullman have endured many economic winters and can foresee another golden age for the community. If you are interested in architecture and urban planning, Pullman is a must-see destination on your next trip to Chicago.