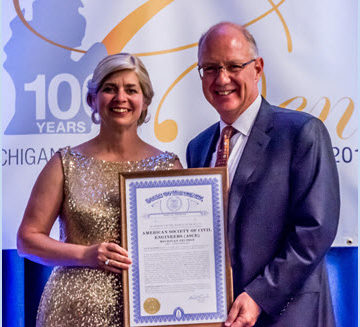 In the most fundamental way, civil engineering is what keeps society working.

This is what makes the centennial celebrations of ASCE Sections so special. This year, four Sections are commemorating 100 years – Illinois, Michigan, National Capital, and Utah.

It has been a crazy centennial for Illinois Section organizers in that the president recently had a baby and the president-elect moved to Minneapolis.

No worries. The celebration went off without a hitch. 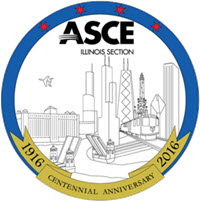 Thera Baldauf, chair of the Centennial Anniversary Committee, Gora and their team began the process by sending out surveys so that they could cater centennial events to member requests. “It’s their anniversary,” Gora said.

The Illinois anniversary celebration actually began last year with a kickoff event at the Section’s annual dinner at Adler Planetarium in Chicago.

The Section hosted a scavenger hunt for Younger Members, as well as a boat tour on the Chicago River. The President-Elect and Scholarship Dinner in the spring also celebrated the anniversary.

Chicago’s rich civil engineering history gives the Illinois Section plenty of accomplishments to boast about, as noted on the centennial website with a timeline that lists out the history of Chicago civil engineering, going all the way back to 1831 and the construction of the city’s first bridge.

“We’ve met new people that we’ve never seen at our events,” Gora said. “It’s been great to see interest from new members by their attendance and involvement in the our Centennial Anniversary.”

The history of the Utah Section is unique among the four centennial Sections this year in that its infrastructure has changed the most in 100 years.

“Utah was rural 100 years ago,” said Stan Klemetson, Ph.D., P.E., M.ASCE, president of the Utah Section. “You sit back and look at all the things that have been built since then, highways, aqueduct systems – it was a desert.”

Utah released its Infrastructure Report Card in 2015 and used the centennial occasion to revisit those results. The Section also received a proclamation from the governor, honoring its 100th anniversary.

The Section’s major project for the year has been a 40-page e-book celebrating the state’s civil engineering history. It is available to read or download on the Section website.

“You go back to 1916 and you had people who thought it was important enough to form this organization,” Klemetson said. “You look at all the projects combining all the skills of a lot of different people, and civil engineering underpins all the work that has gone on.”

The Michigan Section celebrated with a centennial gala dinner in May at Cobo Hall in Detroit, as part of its Michigan Infrastructure Conference.

The Section that formed in Detroit in 1916 witnessed the boom, bust, and boom again of the state’s automobile industry. Today, Michigan is “on the cutting edge of the autonomous car movement,” Kline said. The state also has several famous bridges, including the Mackinaw Bridge, and lays claim, of course, to some of the nation’s most precious water resources.

Said Kline, “Michigan engineers are responsible for keeping the Great Lakes great. Clean and fresh, no salt, no sharks.”

The Gala featured a fitting toast: “To 100 years of an organization of service and sharing, mentoring and growing; to all of those that made ASCE Michigan the honored organization that it is today; and to those who will lead the way through the next 100 years.”

The roots of the National Capital Section go back a little further than 100 years to a group called the Washington Society of Engineers that transitioned officially in 1916 to ASCE National Capital. 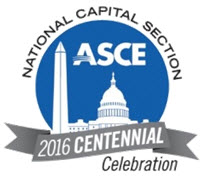 The Section’s centennial celebration centered on a conference in June at the National Press Club in Washington, DC, featuring an impressive array of speakers and presenters.

“We wanted to make sure we had a good crosscut of topics,” said Vic Crawford, P.E., M.ASCE, the Section’s centennial chair. “Washington has always been a very unique place. There are a lot of different organizations in D.C. It’s a local Section, but one with worldwide implications.”

The Section has focused on outreach with much of its centennial work. A major push to that end is a coffee-table book aimed at, not only civil engineers but also, the general public, particularly students. 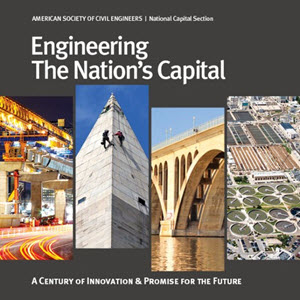 “That was one of our goals, to celebrate our past but also look at our future,” Crawford said. “When someone says, ‘I’m considered my career. What does a civil engineer do?’ Well, here’s a book that shows you.”

The book details Washington, DC, history – the layout of the city grid to the monuments to the local civil engineering treasures – while also celebrating ASCE and civil engineering as a whole. The Section is working to get it in local libraries, schools, and museums. It is available for purchase online.

“The book is going to be the legacy,” Crawford said. “If you want to see what we did in civil engineering in the D.C. area, look at the book.”