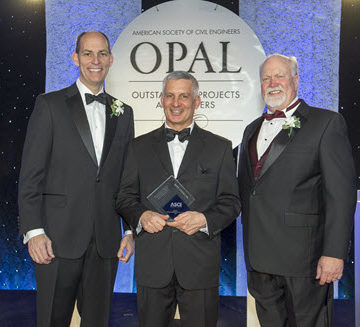 There’s a long-held belief in the world of newspapers – write at a grade-school level. The thought, of course, is that if an elementary school student can understand your article, so too can the majority of your readers.

“I try to pander upward to our readership,” he said. “Something like 57 percent of Seattle has at least a bachelor’s degree. It’s not the same environment as you find everywhere.”

Lindblom’s series of stories covering the construction of the Alaskan Way Viaduct with Bertha, a massive tunnel-boring machine, earned him ASCE’s Excellence in Journalism Award for 2016. He received the honor at the 2016 OPAL Awards Gala.

The series provides a detailed look into the planning, obstacles, and solutions civil engineers have managed with this complex megaproject in the face of relentless public scrutiny.

Though not a trained engineer (his undergrad major was history), Lindblom took pride in writing about the project with great technical accuracy.

“I read the primary documents. I read the blueprints. I filed public records requests for the mining reports on Bertha,” Lindblom said. “Some of the better stories we did came directly from the reports.”

The technical understanding showed in the many graphics Lindblom and The Seattle Times team created to further explain the project work. “Seattle is full of engineers and technologists,” he said. “So, folks will jump on you if you’re not accurate.”

For a project not without controversy that has changed directions and price tags for more than a decade, Lindblom’s coverage has provided a balanced resource for the community.

“We’re just about the only news source that’s independent and doesn’t have a big ax to grind about Bertha,” Lindblom said. “So with Bertha, it’s like being a teacher in a virtual classroom of a quarter-million students. It’s like running a MOOC [massive open online course] except it’s on paper.”

Lindblom’s ongoing coverage of Bertha and the viaduct project can be read in The Seattle Times online.