Satish Nagarajaiah, Ph.D., F.SEI, F.ASCE, professor of both civil and mechanical engineering at Rice University, Houston, has been named a Fellow by the ASCE Board of Direction.

Nagarajaiah has led and pioneered contributions to nonlinear structural dynamics of based-isolated structures, adaptive stiffness structural systems, smart-tuned mass dampers, and nanomaterial-based strain sensing, and to the development of novel sparse structural system identification techniques that have been applied in full-scale buildings and bridges. He has developed advanced analytical modeling and solution techniques, and the computer program 3D-BASIS, used for analysis and design of highly nonlinear sliding and elastomeric base-isolated structures around the world. 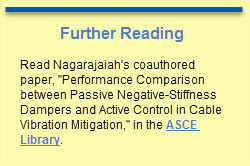 For ASCE, he is the managing editor of the Journal of Structural Engineering, and he edits two other journals as well: Structural Control and Health Monitoring (Wiley International) and Structural Monitoring and Maintenance (Techno-Press). He serves on the ASCE Structural Engineering Institute’s Board of Governors and as its representative on the SEI Technical Activities Division Executive Committee. He has served ASCE in various capacities over the last two and a half decades and formed or lead several committees.

Nagarajaiah’s research has been funded by the National Science Foundation, the National Aeronautics and Space Administration, the U.S. Department of Energy, the Air Force Office of Scientific Research, the Office of Naval Research, and private industry. He has published more than 140 journal papers and over 150 conference papers, and holds four U.S. patents. He has presented several invited plenary and keynote lectures at world conferences.

In 1999 he received an NSF CAREER Award for adaptive stiffness structures. In 2012, he was named an inaugural fellow of the ASCE Structural Engineering Institute. Nagarajaiah was also awarded the Moisseiff Award by ASCE in 2015 for developing new adaptive stiffness structures, and the ASCE Raymond Reese Award in 2017 for developing a novel method for cable tension assessment using sparse identification.