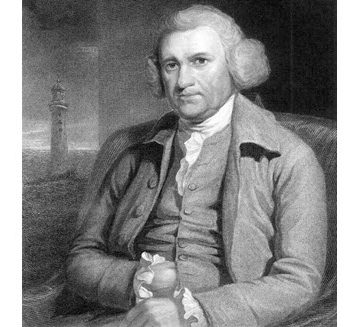 Smeaton was born in Austhorpe, Leeds, England on June 8, 1724. After studying at Leeds Grammar School he was initially trained in law and joined his father’s law firm, but left to become a maker of scientific instruments.

He was elected a Fellow of the Royal Society in 1753, and in 1759 won the Copley Medal for his research into the mechanics of waterwheels and windmills, working out scientifically their power and effectiveness. His tests proved that overshot waterwheels were much more efficient than undershot. The advantage was the result of gravity, which is greater in falling water than in flowing water.

Smeaton analyzed steam engines, making improvements to the early Newcomen engines, working out ways to measure their performance accurately. His 1759 paper, “An Experimental Enquiry Concerning the Natural Powers of Water and Wind to Turn Mills and Other Machines Depending on Circular Motion,” addressed the relationship between pressure and velocity for objects moving in air, and his concepts were subsequently developed to devise the Smeaton Coefficient.

Recommended by the Royal Society at the age of 30, Smeaton designed the third Eddystone Lighthouse after the previous structure was destroyed by fire. He pioneered the use of hydraulic lime, a form of mortar which will set under water, and developed a technique involving dovetailed blocks of granite in the building of the lighthouse. He also developed a method to raise the blocks from a movable floating base 60 feet in the air, so that the stones could be placed atop the lighthouse. 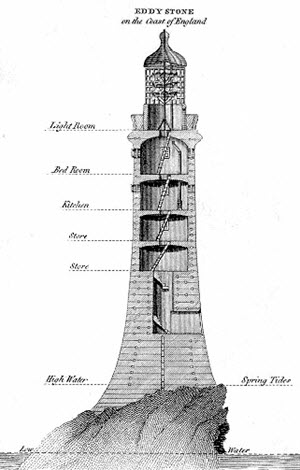 Smeaton is important in the history, rediscovery of, and development of modern cement, having identified the compositional requirements needed to obtain hydraulicity in lime, work which led ultimately to the invention of Portland cement. His lighthouse remained in use until 1877. After the rock underlying the structure’s foundations began to erode, it was dismantled and partially rebuilt at Plymouth Hoe where it is known as Smeaton’s Tower.

After the Eddystone Lighthouse, Smeaton continued his career with an extensive series of projects, including bridges, canals, viaducts, and harbor works. Major works included Scotland’s 35-mile long canal between the Firth of Forth and the Firth of Clyde, at the narrowest part of the Scottish Lowlands. Construction of the Forth and Clyde Canal began in 1768 and was completed in 1790. The canal, which provided an east-west route across Scotland for seagoing vessels, operated until the mid-20th century, closing in 1963.

Smeaton was a pioneer in establishing fixed fees for routine commissions. In 1782, Smeaton was called to testify in court for a case related to silting of the harbor at Wells-next-the-Sea in Norfolk. He is considered to be the first expert witness to appear in an English court.

Highly regarded by other engineers, he contributed to the Lunar Society (a dinner club and informal learned society of prominent 18th century figures) and founded the Society of Civil Engineers in 1771. He coined the term civil engineers to distinguish them from military engineers graduating from the Royal Military Academy at Woolwich. After his death, the Society was renamed the Smeatonian Society, and was a forerunner of the Institution of Civil Engineers, established in 1818.

John Smeaton died after suffering a stroke while walking in the garden of his family home at Austhorpe, and was buried in the parish church at Whitkirk, West Yorkshire.