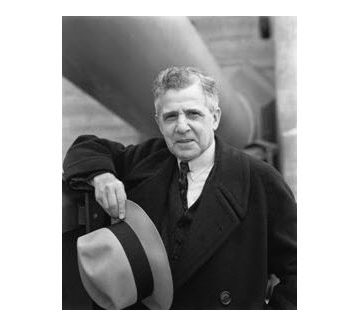 January marks the anniversary of the birth of structural engineer Joseph Strauss, most noted as chief engineer of the Golden Gate Bridge, but deserving of recognition for his innovation in the advancement of bascule bridges and other patents during the first quarter of the 20th century.

Joseph Baermann Strauss was born in Cincinnati, OH, on January 9, 1870, the son of artistic parents. His father was a painter and writer who served as vice president of the Cincinnati Art Club. His mother was a concert pianist until her career was shortened due to an unfortunate accident. Strauss was inspired by his hometown’s 1,057-foot-long Covington-Cincinnati bridge (now Roebling Bridge), the longest suspension span in the world when it opened in December 1866, three years before he was born. He graduated in 1892 with a degree in civil engineering from the University of Cincinnati, where he was both class president and class poet. Strauss’ undergraduate thesis proposed a bridge across the Bering Strait, which would connect North America with Asia. The Russian Empire, alas, did not allow it to proceed. 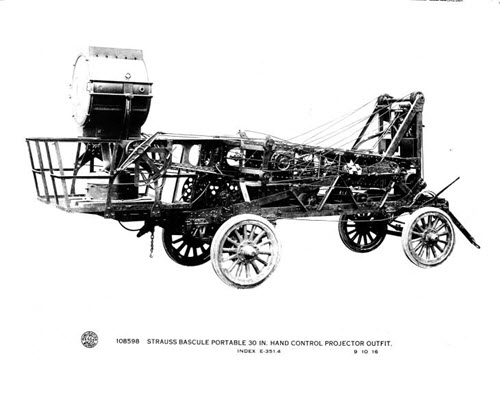 Upon graduation, Strauss apprenticed in drafting, lectured at the University of Cincinnati, and moved to Chicago for a position with Lassig Bridge & Iron Works. In 1899, while in Chicago, Strauss became principal assistant to famed bridge engineer Ralph Modjeski; under Modjeski’s tutelage, he designed many of the lift- and drawbridges over the Chicago River. It was there that he began to modernize the design of bascule bridges, a type of moveable bridge that operates on the principle of balanced counterweights. At the turn of the century, bascule bridges were built with iron counterweights and Strauss proposed using cheaper, concrete counterweights in place of iron. 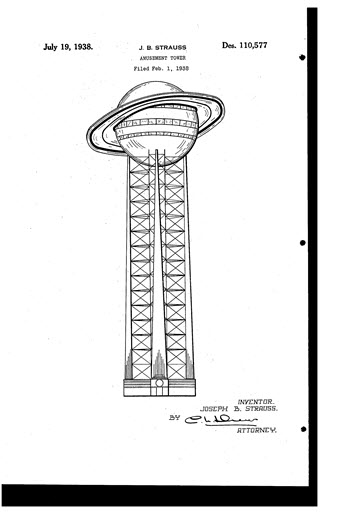 In February 1901 he received a patent “to provide a lift-bridge wherein one part of the structure balances the other part either partially or wholly, thus reducing or eliminating the counterweights now used in all kinds of lift-bridges.” Since Strauss was a prolific inventor, the patent was one of more than 50 received by him between 1891 and 1938. His first, issued in November 1891, while still a student, was for electric train-signal improvements, and his last, the design of a light-measuring device, was granted six months after his death.

In 1902, Strauss founded his Strauss Bascule Bridge Company (later renamed Strauss Engineering Company) and built the first bascule rail bridge over the Cuyahoga River, near Lake Erie. In September of 1903 he patented the Strauss Trunnion Bascule Bridge. Strauss revolutionized moveable bridges and his trunnion bascule bridge became a worldwide standard. Over the next three and a half decades, Strauss’ portfolio boasted over 400 bridges, among them the 1905 China Basin Bridge in San Francisco; the 1915 bascule bridge over Neva River in Petrograd, Russia; the 1920 Mystic River Bascule Bridge in Mystic, CT; the 1929 Lewis & Clark Bridge over the Columbia River; and the 1932 Arlington Memorial Bridge in Washington, DC. 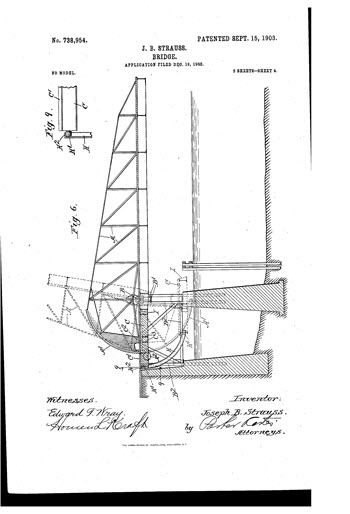 Strauss’ affiliation with the Golden Gate Bridge began in 1917, when he was asked by the San Francisco City Engineer to prepare a feasibility study. He provided preliminary sketches in 1921 and a year later, plans were publicly revealed. Strauss campaigned tirelessly over the next decade to build the bridge. Although Strauss is widely credited and known for the Golden Gate Bridge, principal engineer Charles Ellis, who was dismissed by Strauss in 1931, was chiefly responsible for the structural design. Construction began on January 5, 1933, and on April 28, 1937, Strauss watched the driving of the ceremonial last gold rivet, marking the completion of the structure. Exactly one month later Strauss attended the official opening of the bridge to vehicular traffic.

Strauss’ calling as an innovator was not limited to bridges. In 1905 he received patents for a “Sound-Destroying Device for Railways” and a “Holding Rack for Checks.” In 1915, for the Panama-Pacific International Exposition in San Francisco (1915 World’s Fair), Strauss designed the Aeroscope, a two-level, 120-person passenger car attached to the end of a steel arm that was slowly raised by a counterweight to a height of 235 feet for a spectacular view of the fairgrounds and city. During World War I, Strauss devoted much of his time to designing a reconnoitering apparatus (a portable searchlight) and reinforced concrete freight cars for military forces.

In 1922, he received a patent for an ornamental directional road sign design. In 1930, he received another for a “Motion Picture Reproducing Apparatus.” In 1931 he received patents for a new and improved “Dirigible Flying Machine” and a prefabricated composite “System of Building Construction.” 1935 brought one for an “Apparatus for Taking Photographs” that automatically sensed light intensity. In 1937, Strauss proposed a rapid transit system for the city of Los Angeles, and in 1938 he obtained a patent for the design of an amusement tower.

Joseph B. Strauss died on May 16, 1938, in Los Angeles, a year after the opening of the Golden Gate Bridge. He is interred in the Great Mausoleum at Forest Lawn Memorial Park, in Glendale, CA.