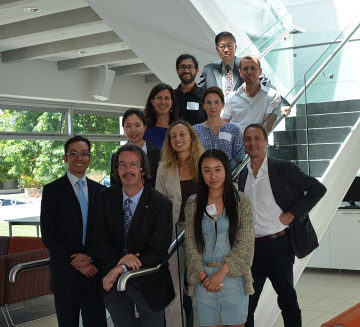 An ASCE-sponsored team of civil engineers traveled to New Zealand December 2-10, 2013, for the purpose of investigating and documenting case studies on multihazard earthquake-flood interaction that impacts lifeline systems and community-wide recovery following a major earthquake.

Among the products resulting from this project, a collaboration of TCLEE (Technical Council on Lifeline Earthquake Engineering), GI (Geotechnical Institute), and COPRI (Coasts, Oceans, Ports, and Rivers Institute), will be two monographs that will have direct benefit in other seismic-prone regions in the U. S., such as the Pacific Northwest, the Sacramento–San Joaquin Delta, and the Mississippi River basin, and also potentially will have an application to other important issues under investigation to the civil engineering community, including sea-level rise due to climate change.

The earthquakes in Christchurch, New Zealand, on September 4, 2010, and February 22, 2011, and the earthquake and subsequent tsunami that struck Tohoku, Japan, on March 11, 2011, were selected as locations for the reconnaissance team because of their ability to provide unprecedented data to document and demonstrate the issues impacting lifeline systems in relation to the multihazard interaction between earthquakes and flooding.

The team – composed of Craig A. Davis, Ph.D., PE, GE, M.ASCE; Alex Tang, P.E., F.ASCE; Rachel Davidson, A.M.ASCE; and Leonardo Duenas-Osorio, A.M.ASCE, as part of Lifelines Week, organized by the University of Canterbury – traveled to Christchurch in December to continue their investigation. Nagahisa Hirayama, Ph.D., from the National Institute for Environmental Studies in Japan, and Paolo Franchin, from the Sapienza University of Rome, also participated in the New Zealand leg of the project.

Earlier in June 2013 the TCLEE team visited Japan, where they performed investigations coordinated by Kobe and Kyoto Universities. More recently, Chinese engineers joined the project while Davis was traveling in Chengdu, China, in October 2013 to add important lessons learned from the hundreds of landslides that dammed up major rivers after the 2008 Wenchuan earthquake, flooding many communities and critical lifelines.

Craig A. Davis, center, led an ASCE-sponsored team of civil engineers to New Zealand December 2-10, to investigate and document the risks involved in multihazard earthquake-flood interaction.

“Christchurch sits along the coast with several rivers that run through the city,”  explained Davis, the project team leader, who is employed as a geotechnical engineering manager with the Los Angeles Department of Water and Power. “This,in addition to the fact that it was built in the swamps, results in the huge liquefaction and settlement taking place there.

“Having studied earthquakes for the past 20 years, I kept noticing this recurring theme related to increased flood and inundation risks after earthquakes. I came to understand there is an interesting cascading effect that we as civil engineers should consider pursuing, which is [that] after you have an earthquake, how does your flood and inundation risk change? What are the mechanisms causing the changes in risk, what are the impacts to the lifelines, and what are the associated impacts to the community?

“So based on those questions, the purpose of this project is to investigate the earthquake, flood, and multihazard impact on lifeline systems.”

Photo from a Royal New Zealand Air Force P-3K Orion that conducted aerial surveillance of the flooded areas affected in Christchurch earthquake that occurred on February, 22 2011.

Davis says that the Christchurch community thought their project was so important that the University of Canterbury decided to create a master’s program on the topic of risks involved in multihazard earthquake-flood interaction and its impact on lifeline systems and community-wide recovery following a major earthquake.

“The University is funding two students who will receive a master’s degree and Alex Tang and I are serving as advisors to them,” notes Davis. “The first day that we were in Christchurch they kicked off their program, so we got to help lay out what the program should look like and help insinuate the direction of the types of research that the students will perform, data collection, how they process it, and how to move it forward.”

Among the team’s key findings are these:

Davis added that another finding is the need for an international multihazard workshop among civil engineers in the U.S., New Zealand, Japan, and China to share data, learn from others, and make final coordination for preparing monographs.

Among the important lessons from the earthquakes:

One of the most interesting lessons, Davis explained, was “the significant negative impact to transportation and emergency response immediately after the February 22, 2011, Christchurch earthquake as a result of flooding in streets from water ejecting out of the ground. Because of liquefaction, groundwater kept flowing to the surface and flooding streets. Portions of Christchurch looked like the canals of Venice.”

Example of liquefaction-induced flooding the team saw while in New Zealand.

“We intend to write at least two monographs, maybe three, with the third focusing on China and that is to be determined,” says Davis “The purpose of these monographs is to document the information and identify significant case studies. The next step in the process is to take that information to a higher level and that is the creation of an international workshop. And then we are going to determine if we have sufficient information to create some guidelines.”