Real Steel, Behind the Scenes in One Burns Harbor Mill 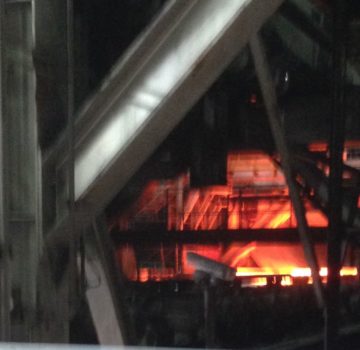 The blast furnaces at the Arcelor Mittal mill in Burns Harbor, Indiana must operate continuously. Restarting a furnace costs approximately $5 million. Three shifts therefore work around the clock feeding the furnaces a diet of iron ore, coke, and limestone. After the chemical reaction is complete, they’ll tap the crucible and extract the raw pig iron having just completed the first step in the transformation of raw material to industrial steel.

Making steel is a high tech multiple-step process requiring fantastically large equipment and a delicately controlled process. The size and scale of this fully integrated industrial mill dwarfed my expectations. The plant has the capacity to produce 5 million tons of steel daily. It consumes 515 million gallons of water. And even given the plant’s automation, 3,500 employees and countless haulers are employed to keep the system churning out product.

I learned about steel making on a tour of the Burns Harbor plant along with a group of students from the University of Michigan. Our guides included two seasoned operators who had spent their entire careers in the mill and two metallurgists whose alchemy allows Arcelor to offer thousands of customized recipes for the perfect steel in any situation. Our guides presented a master class in steel production.

Too large for any single building, the steel making process is divided into coke production, blast furnaces, primary forming, the hot mill, the cold mills, and various finishing procedures. Opened in 1964, the Burns Harbor plant was one of the last fully integrated mills to be constructed. The planners thoughtfully laid out the buildings so that the material would progress eastward from raw material arriving by sea on the west side if the site to the rail yard hauling rolls of finished metal out the east end. Though we got a little lost navigating the on-site roadways, the path for the steel is simple.

The process begins before the furnaces with the preparation of the coke and iron ore. Carbon is a primary ingredient for high strength steel, and that’s typically added via a modified coal product, called coke. The coking coal at Burns Harbor is baked for 18 hours and quenched with 10,000 gallons of water to prevent the coke from deteriorating into charcoal. By the end of the procedure, the coke is almost purely carbon.

Meanwhile the Taconite ore must be processed because the United States has exhausted its supply of high-grade red ore. Taconite has an iron content of only 20 to 30%. The refinement process begins by crushing taconite ore and mixing with water to create a fine powder. Powerful magnets separate the iron ore from the waste rock. Transportable pellets are made by rolling the concentrate with clay inside rotating cylinders.

The raw materials are then subjected to a series of violent chemical reactions within a blast furnace. Temperatures within the furnace reach 3,000 degrees Fahrenheit. Refractory brick lines the furnace walls to insulate the vessel and redirect the heat toward the ongoing reaction. The raw materials are added to the top of the furnace while preheated air is pumped in from the bottom. After six to eight hours the molten pig iron is ready to be drained from the furnace.

The Basic Oxygen Steelmaking (BOS) furnace is next inline. The hot pig iron is poured into a large rotatable vessel, called a ladle, and returned to approximately 3,000 degrees Fahrenheit. The ladle is then righted and a water-cooled lance is thrust into the mix. The lance discharges nearly pure oxygen under pressure for 15 to 20 minutes. After removing the lance, the open surface will have hardened somewhat and a taphole is created to allow the molten steel to flow into a casting form. Flat slabs are produced for later processing into plate while long billets with a square cross-section are preferable for cable fabrication.

The above process were described in detail by our tour guides, and we were able to observe the monstrous furnace towers from the outside. Unfortunately, time and extensive safety precautions did not permit our tour to observe the furnaces in action. We picked up the process in the hot plate mill, where the raw steel slabs would be flattened into spools of light gauge sheet metal.

My first impression upon entering the hot mill was the enormity of the building. In the course of our tour, we walked along the line for three-quarters of a mile. A massive storage area at the end of the line further lengthens the building. We first walked through a huge electrical room complete with emergency generators, there to keep the line running. However, I though it was surprising to learn that the local power company supplies most of the day-to-day electrical needs.

The reheat furnace is the first component of the plate mill. It reheats the large steel plates to a malleable temperature. Large mechanized claws retrieve a yellow-hot plate every few minutes. We paused near the furnace to observe the operation. The heat from emanating from the furnace doors was incredible. It was an awesome sensation to feel the heat from each plate as it rolled past on the line just below our catwalk.

Almost as soon as the plate is exposed to the natural environment, the oxygen in the air will begin to form a type of superheated rust on the surface of the plate. High-powered water jets are used to power-wash off the scaling before it is pressed into the material. This causes a loud hiss and formation of blinding steam-cloud right before the plate passes into each pressure roller. The first three roller stations were spaced many yards apart. As the plate passes through each roller, the exiting speed picks up. Similar to Bernoulli’s principle, the volume rate entering and exiting the press must remain the same, so as the cross section is reduced to yet flatter stock the exiting speed must pick up. After passing through seven rollers the original 12” thick plate could be less than 1/8” thick and therefore traveling up to 37 miles per hour down the line.

We stopped to watch the process from within the control room. The level of automation in the line is apparent from this well instrumented nerve center. Dozens of computers are suspended from workstations rapidly flashing coded messages and outlining the second-by-second efficiency in the line. The grizzled veterans manning the stations downplayed the complexity of their job. They would no doubt earn their keep if any problems developed on the line.

Finally, after proceeding through all the presses and a cooling cascade of water, the thin sheet metal is coiled around large spools. While we watched, two spools alternated receiving the metal strips. After winding, huge arms tilt the spools onto a conveyor embed in the floor. A lone laborer attaches a thin band to prevent the coil from unwinding. Then the spool is placed in queue for the crane rail to relocate the coils for storage or shipping. A nine-axle flatbed semi trailer can only carry two of the coils, while a railcar can hold nine or more.

The students and I probably learned more about steel in one morning than in half a semester behind a desk. I was really impressed with the enormity of the plant. The steel sections that I typically specify in building construction are mere toothpicks compared to the tonnage produced for industrial applications in Burns Harbor. No matter the economy, the engine of American industry is running.