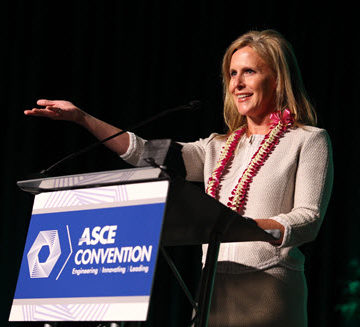 This is a president who is as plugged into social media and the modern ways ASCE members – young and old alike – communicate with each other as any Society leader in recent memory.

“It’s about connection,” said Swallow, P.E., ENV SP, F.ASCE, who was inducted as the 2018 ASCE president during Tuesday’s annual business meeting at the ASCE 2017 Convention in New Orleans.

“If I didn’t use social media I wouldn’t know what half the people in my life are doing. It helps me connect, but it also helps us spread the word about what we’re doing. As civil engineers, we’re not just Dilbert in a cubicle. We’re doing real things, and we’re really impacting our communities.”

This is a president who joined ASCE committees while she was still in her twenties. A president who tweets out photos of ASCE Foundation Phil from the airplane every time she and her husband David – also a civil engineer and ASCE member – fly out to another Society event. A president who works by day as a program manager for the city of Las Vegas and trains in something called aerial acrobatics on her off time.

“Above all she’s proud of our profession and ASCE … and wants to elevate the role we have as engineers,” David Swallow said in an introductory speech. “I think Kristina exemplifies what we should all want to be as active members in ASCE, as professionals in the workplace, and as civil engineers.”

Swallow, Kemper, and Mattei represent the first trio of female presidential officers in ASCE history, a fact not lost on Swallow. “This is for all the little girls out there thinking they want to be an engineer and knowing there’s a path for them,” she said in her presidential speech.

Swallow celebrated the ceremony with a large cheering section – David, her parents, extended family, and plenty of Las Vegas ASCE friends who have worked with her for years and grown in their own careers, looking up to her as a role model.

“It was incredible having everyone here,” Swallow said. “I knew they were coming, and I knew that it was really meaningful, and I was going to love it. But it was overwhelming, ultimately.”

And now, as the pomp and circumstance die down, it’s time to get to work as ASCE’s new president.