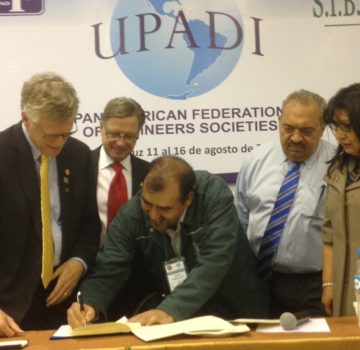 “The growing economies in this hemisphere are not in North America or the U.S., but in countries in South America such as Brazil, Argentina, Bolivia or Colombia. So, if ASCE wants to be part of the global exchange of technical and engineering information, then we need to be at that table.”

So remarked ASCE President Randall “Randy” S. Over, P.E., F.ASCE, upon his return from an 12-day presidential trip that took him to Bolivia, Colombia, and Panama August 9-21.

“The goal of this trip,” explained Over, “was to reestablish our professional relationships with all the countries that make up UPADI in the Western Hemisphere, but particularly Central and South America and the Caribbean. By traveling internationally and having a ‘seat at the table’ on the global stage, ASCE was able to connect with our engineering counterparts and members, [something] we hope will result in new opportunities for ASCE.”

Central to the trip was taking part in the XXXIV Convención Panamericana de Ingenierías, the 2014 convention of the Unión Panamericana de Ingeniería (UPADI), in Santa Cruz, Bolivia. Over participated on a panel hosted by the General Assembly on Sustainable Infrastructure. Also in attendance were several Society leaders, who engaged with the 28 other countries that make up UPADI to share ideas and information about how each country has been able meet the challenges of the ever-increasing demand for energy, transportation, and water and wastewater management, while protecting the environment and developing natural resources.

“This trip was not just about meeting and greeting,” added Natale, “it’s all about collaborative opportunities and how ASCE can help make a difference to improve conditions in other countries and that includes business opportunities for ASCE and our members.

“This was an opportunity to engage with our colleagues from the Americas including the Caribbean and it was a chance for us to get together and share what is going on in many areas that are important to the engineering profession, such as STEM education, sustainability, ethics, and many other things.”

ASCE President Randall “Randy” S. Over, center, was inducted as a member of the Pan American Academy of Engineering. Vilas S. Mujumdar, left, and Patrick J. Natale, join Over at the ceremony. Photo Credit: Mike Sanio

After landing in Santa Cruz, Bolivia, the ASCE delegation attended the opening of the Pan American Academy of Engineering (API), where Over was inducted as a member of the prestigious organization which includes over 200 distinguished engineers and many past ASCE presidents and leaders, including William P. Henry, Patricia D. Galloway, William J. Carroll, Luther W. Graef, and Natale.

“It was a great honor to be inducted into the Pan American Academy of Engineering,” says Over. “And [to] follow in the footsteps of so many great ASCE presidents and leaders.”

With the opening of the UPADI General Assembly the next day, Over was invited to address the membership on the subject of “Sustainable Infrastructure in the Americas” and then be part of a panel discussion on Ethics and Infrastructure. Among the panelists were Wendy Hallgren, vice-president of compliance at Fluor, and Maristella Aldana, chief of the Office of Institutional Integrity at the InterAmerican Development Bank.

Speaking to the General Assembly, Over stated, “It has become clear that the infrastructure we [the U.S.] have built over the past 50 to 100 years has aged. Although our infrastructure was planned, designed, and built to meet expected growth, we have outgrown it, and in some cases failed to maintain it.

“We have learned the hard way that clean air and water are inextricably linked to health and prosperity. We have learned through unexpected blackouts the extent of our energy consumption, especially during periods of extreme weather. And we have learned about the costs of congestion, on our time and the quality of our lives. All of these factors impact our infrastructure, and each year, we face ever larger needs for maintenance, renovation, and replacement.”

Meanwhile, Natale addressed the UPADI Technical Council meeting on the subject of “Best Practices for Committee Management: Experiences from a Pro.”

“The best way to be effective is to have a strong working relationship between committee chair, committee members, and the UPADI board. The key message is Work together!”

Among the other highlights of the Bolivia part of the trip, ASCE signed an Agreement of Cooperation with the Society of Bolivian Engineers (SIB), which the Society had been attempting to achieve for several years. Raymond Issa, Ph.D., P.E., F.ASCE, was elected the North American vice-president of UPADI, succeeding Canada; ASCE past President, William P. Henry was awarded UPADI’s top award, the Plomada d’Oro (the Golden Plummet Prize), for his leadership; and Michael Sanio, ENV SP, CAE, F.ASCE, ASCE’s director of Sustainability and International Alliances, was elected for a second 2-year term to the API board.

Over and Natale then flew to Panama City, Panama, as invited guests of the Panama Canal Authority to a black-tie event celebrating the Panama Canal’s 100th anniversary. The Centennial Gala was an artistic, musical, and theatrical extravaganza representing the epic construction of the canal, and it was broadcast live on Panamanian television.

More than 2,000 guests turned out at the Figali Convention Center on August 15 for what the organizers called the “gala of the century.” The main event was a singing and dancing extravaganza telling the story of Panama from its earliest beginnings to the present day. Highlighting the evening was a group of acrobats twirling from above the stage on ropes and trapeze swings to simulate the birth of the isthmus that would separate the Atlantic and Pacific Oceans.

“It was an A1 celebration and done with class,” says Natale, who was joined at the gala by ASCE Panama Section President Horacio Victor Ibarra, P.E., M.ASCE, and Fred Berger, P.E., M.ASCE, and chairman of the Louis Berger Group Inc. “They had their top stars in the country come and introduce different events. Among them was boxer Roberto Duran, who fought Sugar Ray Leonard a couple of times.”

ASCE was a guest of the Panama Canal Authority because of the prominence of the Society and the work that civil engineers have done in constructing the canal. John Findlay Wallace and John Frank Stevens both served as chief engineer of the original Panama Canal construction project, and both served a term as president of ASCE – Wallace in 1900 and Stevens in 1927.

“It was a fabulous event,” says Over. “One of the great things about the gala was the artistry; they featured every country or culture that was involved in building the canal. I think what they were trying to show with this event is there was this blending of countries and cultures and that is what helped create this world-changing canal; it was a phenomenal gala.”

The final leg of the journey took the group to Colombia for a series of meetings with engineering associations and government agencies and with members of ASCE’s Columbia Section.

Over, Natale, and Maughan-Brown first met with Diana Maria Espinosa Bula, the first female president of the Society of Colombian Engineers. After Over gave a presentation about ASCE, the group sat down to discuss how to transition students to membership and the idea of forming a Younger Member group to achieve this. Before leaving, Over signed a renewed Agreement of Cooperation with the Society of Colombian Engineers.

They next met individually with Roger Rodriguez Moreno, vice president of Construction at the National Agency of Infrastructure; Juan Martín Caicedo Ferrer, executive director of the National Chamber of Infrastructure, and Luis Alberto González Araújo, executive director of the Colombian Association of Engineering Schools, before traveling that evening to meet with members of ASCE’s Colombian Section and students from the Universidad de los Andes, the Universidad Del Norte, and the Escuela Colombiana de Ingeniería Julio Garavito.

“We were extremely well received,” recalled Over. “We had quite a number of students in attendance and younger members who came as well. After my presentation we had a Q&A session that lasted longer than an hour, much longer than anticipated. We had lots of questions specifically about ASCE but they seemed to be most interested in sustainability and Raise the Bar, and how it could potentially affect them.

“The members were also very interested in the Body of Knowledge and how that relates to education and accreditation. Colombia is going through a process right now to establish a structural engineering test; they don’t currently test for licensure, it is based on eminence and education. So they were very anxious to talk to us about how we test for licensure in the U.S.”

“We went to Colombia to just have real, meaningful discussions that will create some great business opportunities for ASCE – whether it is publications, continuing education, conferences, sustainability, or other areas,” stressed Natale. “For example, we talked about working with Colombia on potential translation of technical material to Spanish that would be a benefit to the Americas – the Central, South, and Caribbean nations – and Spain.

“I believe that this trip, coupled with my trip to Brazil a couple of months ago, presented some real opportunities for ASCE to interact and do business south of the border in Central and South America. Engineering is not a U.S.-dominated profession. It’s global and there are opportunities for us to work together. I think we are looking at a new era for ASCE.”