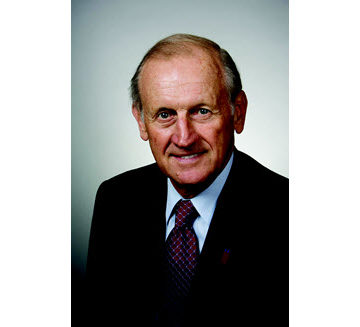 There is plenty of optimism surrounding the push for more sustainable infrastructure. Plenty of pessimism too.

Richard Anderson, president emeritus of the New York Building Congress, falls firmly into the camp in between: realism.

He advocated for strategic infrastructure investment for 22 years as the New York Building Congress president. So when he says, “There’s no substitute for governmental leadership,” it’s equal parts wisdom and warning.

A featured speaker at the 2017 ASCE International Conference on Sustainable Infrastructure, Oct. 26-28 in Brooklyn, Anderson offered a heady dose of real talk in a conversation with ASCE News.

ASCE News: These are issues you’ve been working on for a long time. I’m wondering if you’ve seen a progression in terms of how receptive some of the owners and stakeholders might be now toward sustainable infrastructure ideas?

Richard Anderson: “Unfortunately, that sounds like wishful thinking. We are devoting a lower percentage of gross national product to infrastructure investment than at any time in the last century. So while people may be saying the right things as a nation, we’re not doing the right things.

ASCE News: So how do you make that case to those owners that this is absolutely necessary?

“You talk about stakeholders and it’s all of us. We have met the enemy and it is us.

“There is not as much available for infrastructure investment. So we have to find ways to shift the equation and to generate additional revenue dedicated to infrastructure.”

ASCE News: Which I suppose could mean more advocacy or more innovative engineering. What are, do you think, the best ways forward?

Anderson: “We just have to convince the American public that they have to dig into their pockets to come up with money for infrastructure investment. And we can find innovative ways to do that. Some of the states – because the federal government is not leading the way as it has in the past – are biting the bullet. They are dedicating new taxes to transportation in particular but also to water and sewer development and other forms of infrastructure.”

ASCE News: What’s your take on P3s as a large-scale solution to a lot of these problems?

“In New York state, for example, we have yet to achieve legislation that would permit widespread use of P3s, and that’s a real limitation. Once you get over that hurdle, you have to find suitable projects and develop a formula that works.

“So it’s part of the solution but not the total solution.”

ASCE News: Let’s talk about your work there in New York. What have been some of the things you’ve done that can be held up as success stories or recommended as successful strategies?

Anderson: “New York has a number of success stories. We’ve been led by a governor, Andrew Cuomo, who believes in infrastructure investment. He has an overall state program that amounts to about $100 billion that includes public-private partnerships for the rebuilding of LaGuardia Airport, for a new Goethals Bridge from Staten Island to New Jersey, and other kinds of projects.

“He has encouraged the Metropolitan Transportation Authority to approve its latest five-year capital program; the Port Authority of New York and New Jersey has a 10-year capital program; and he’s come up with a number of other innovative projects. He’s firmly behind a new rail tunnel between New York and New Jersey that is desperately needed, for economic and environmental reasons.

“The successes of New York are led by its chief executive, and this is really very important. We have our new bridge, the [rebuilt] Kosciuszko Bridge – a $500 million undertaking that was done design-build with Skanska as the contractor. A great success story, and the governor was very pleased with that.

“And as the American Society of Civil Engineers has pointed out, we have a huge infrastructure deficit in this country. The latest rating was a D+. When I was in school, that wasn’t a very good grade.”