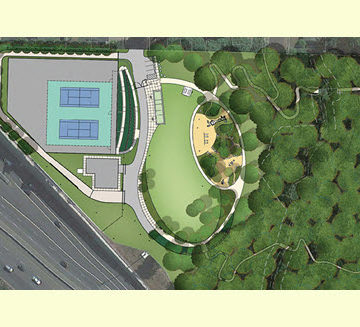 In partnership with Tualatin Hills Park and Recreation District, the Ridgewood View Park project is the first joint water storage reservoir and park facility to receive an Envision award from ISI, an organization cofounded in 2011 by ASCE, the American Public Works Association, and the American Council of Engineering Companies.

Project planning for Ridgewood View Park started in 2012 with the design firm AECOM, and construction began in 2014. It is scheduled to be completed this summer.

The park began with the demolition of an existing 5 million gallon reservoir, followed by the design and construction of a new 8 million gallon reservoir and 11 million-gallon-per-day pump station. It also has 6,700 feet of new water pipelines and park improvements, including new tennis courts, a bocce ball court, a nature-themed play area, landscaping, walking trails, and site pedestrian connections.

“The Ridgewood View Park project is crucial to the reliability of the water system, and has definitely been a combined effort between the community and multiple agencies from the outset. It is very gratifying to receive independent verification that this project represents a best practice in sustainable design,” said Nick Augustus, TVWD’s Ridgewood View project manager and engineer.

“Oregon and the Portland region have a well-earned reputation for focusing on green or sustainable infrastructure,” said ISI President and CEO Bill Bertera.

“The Ridgewood View Park and Reservoir project is a perfect example of how Oregonians are progressively leading in sustainable infrastructure development.”

Learn more about Envision and ISI.