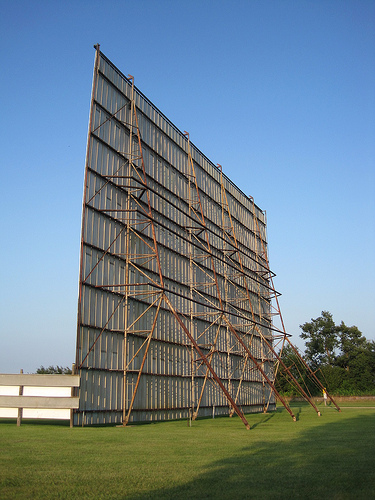 A while ago we happened upon an old drive-in theater in a small town in Illinois. I had never been to a drive-in before. It took some time to figure out the etiquette and comfortable ways to watch. Sitting on the hood of the car was not as comfortable as I would have thought.

During the intermission, I checked out the structure supporting the screen. Likely the screen stays up all year long, weathering the winters and resisting some pretty serious wind loads. You can see that the screen is supported by four trusses which are braced at their midpoint. The coolest part is the way the braces have been designed with three tension rods spaced equally around the brace. If the pipe would ever begin to buckle in one direction, the opposite rods would snap into tension and prevent buckling. We used a similar design on our ASCE Steel Bridge one year; we called it the flux capacitor.

Have you found interesting structures in unexpected places? Share your discoveries in the comments below.