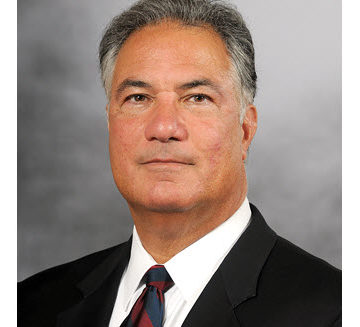 With his career at a crossroads, Tony Bartolomeo hit the books.

Well, one book in particular – What Color Is Your Parachute? by Richard Nelson Bolles.

The classic of career planning and self-actualization helped Bartolomeo map out his future. For the last 30 years, he’s made it happen, taking those plans from paper into reality as one of the most successful leaders in the industry.

“I often say the two most important days of your life are the day you were born and the day you figure out why,” Bartolomeo said.

The CEO and president of Pennoni in Philadelphia, Bartolomeo, P.E., F.ASCE, will be honored this week as ASCE’s 2017 Outstanding Projects And Leaders Award winner for management.

“Anthony is an exceptional leader committed to excellence in everything he does. Pennoni has been overwhelmingly successful and is a coveted place to work, thanks to his dedication and expert leadership,” said Norma Jean Mattei, Ph.D., P.E., F.SEI., F. ASCE, president of ASCE.

The early portion of Bartolomeo’s career was defined by work ethic. Inspired by his father’s career as a laborer at a Brooklyn sewage treatment plant, Bartolomeo studied civil engineering and got to work.

“I didn’t have grand career plans when I got out of school. I didn’t have any master strategy to it,” Bartolomeo said. “I went to work every day and did what I did.”

What he did was rise through the ranks in the Environmental Protection Agency, cleaning up Superfund hazardous waste sites. But that book, What Color Is Your Parachute?, helped him think deeper than maybe he had previously about what he valued in his career as he contemplated his next move.

Using the book’s template, Bartolomeo determined that he wanted to stay close to family in Philadelphia, that he was interested in consulting engineering, and that he valued the prospect of starting a new initiative.

With these priorities in mind, he approached Chuck Pennoni, whom he knew through ASCE Philadephia, with an idea. How about starting a new environmental practice at Pennoni Associates with Bartolomeo heading it up? Pennoni considered the inherent risk involved but trusted Bartolomeo enough to take the chance.

“He said, ‘Go out and meet clients, tell them what we do and develop opportunities for business. You have free rein, just make it happen,’” Bartolomeo recalled. “That was exciting; a little intimidating, but exciting.

“It was a tremendous turning point in my career.”

Bartolomeo dove in with the same work ethic that had taken him from working-class Brooklyn to the EPA. First, he’d put on a suit and sell clients on the Pennoni services. After securing the contract, he’d change into his work clothes and collect soil samples and site data. Then back to the shirt and tie to deliver the reports in board rooms across the region.

“I really learned a lot from the ground up on how to do consulting engineering,” Bartolomeo said.

When Chuck Pennoni stepped down as CEO, Bartolomeo was a natural choice to succeed him, and he has helped grow Pennoni Associates into an Engineering News-Record Top 100 firm, with revenues of $180 million in 2016 and more than 1,200 employees and 30 offices across the country.

For ASCE, Bartolomeo served as chair of the Industry Leaders Council, where he played a crucial role in establishing the Society’s Grand Challenge to significantly reduce infrastructure life-cycle costs by 2025.

As he enters his third decade at the helm of Pennoni, Bartolomeo is more interested in looking toward the future than dwelling on past accomplishments. Pennoni recently created the position of Chief Innovation Officer to focus on deployment of innovative technologies which optimize the value of the investments Pennoni’s clients are making in their infrastructure systems.

“Innovative technology application in the infrastructure arena is something that will help get more done with the resources that are available, which is the main objective of ASCE’s Grand Challenge,” Bartolomeo said. “So, these are exciting times.”