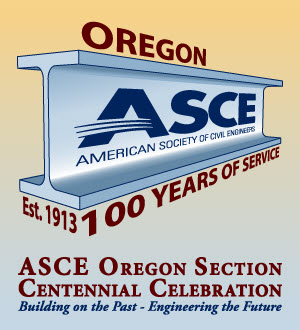 On September 13, 2012, three historic bridges – the Broadway, Hawthorne, and Steel – that carried people across the Willamette River in Portland, Oregon, for over a century were dedicated as ASCE local historical landmarks for their significance to the greater Portland community.

So it was no surprise that the Oregon Section decided to celebrate its 100th anniversary by highlighting the state’s significant civil engineering achievements, such as those 3 bridges. The result was the creation of a timeline exhibit that illustrates the history of civil engineering in Oregon. A series of eleven 8 x 4 ft. panels, the timeline begins in 1910 and concludes by looking to the future at structures that are either under construction or planned. The colorful panels describe through archived photographs, pictures, and text, historical civil engineering achievements in the areas of transportation, energy, people and events, water and the environmental, equipment and technology, and structures.

To celebrate its 100th anniversary, ASCE Oregon Section designed a timeline display featuring eleven 8 x 4 ft. panels beginning in 1910 and concluding by looking to the future at structures that are either under construction or planned. Photo Credit: Oregon Section

“The plan is for the display to go on tour for the next couple of years as a showpiece to illustrate what civil engineers have done in Oregon for the past 100 years,” explained Allison M. Pyrch, P.E., GE, M.ASCE, Oregon Section program chair, sponsorship coordinator, and event contact for the 100th anniversary. “Civil engineering may not be the most financially rewarding field, but there is definitely a benefit to the work that we do and how we serve the public[,] and it is really interesting and gratifying to see that in our physical display.”

“The timeline took a lot of effort,” Pyrch says. “A large amount of the information we collected for the display was from ODOT (Oregon Department of Transportation), the FHWA (Federal Highway Administration), from cities and counties throughout the state, and colleges in Oregon with civil engineering programs.”

As one of the keynote speakers at the Centennial Celebration, then ASCE President-Elect, Gregory E. DiLoreto, presented attendees with a look back at the history of the Oregon Section. Photo Credit: Oregon Section

The event was held in conjunction with the 2014 Northwest Regional Student Conference, hosted by Portland State University April 25-27. The conference was attended by over 350 students from civil engineering universities in Alaska, Idaho, Washington, Oregon, and Montana. Event sponsors included Oregon State University School of Civil and Construction Engineering, CH2M Hill, and HDR, Inc.

“When I arrived at the event about 15 minutes after it started it was really a nice surprise to walk in and have this entire front hallway [of OMSI] lined with our timeline,” recalled Pyrch, who is a geotechnical engineer with Hart Crowser, Inc. “Groups of people were talking and chatting and there was a really a lot of positive karma; it was an excellent event and we received a lot of really good feedback.”

The event also featured C. J. Riley, a professor at Oregon Tech who brought in and demonstrated Gottschalk’s Continostat, which was an early predigital era instrument for modeling and analysis of indeterminate structures. ODOT historians Chris Bell, Bob Hadlow, and Rebecca Burrows shared with the attendees an old copy of the Oregon Historic Bridge Field Guide. Gary Brannan was also an invited guest from the Friends of the Historic Columbia River Highway and brought along some of their historic highway displays and brochures.

A Strong Case for Infrastructure Development

While designing a very nice timeline for display, the Oregon Section’s project unintentionally illustrated just exactly how old Oregon’s infrastructure really is, making a very strong case for the need for infrastructure investment.

“One of the most interesting things we learned while designing the timeline was when most of the infrastructure in Oregon was built,” noted Pyrch. “For example, we discovered that most of our important bridges were built in the 1910s, 1920s, or 1930s, which was long before we realized Oregon’s actual seismic hazard. Trying to convince the general public, politicians, and decision makers that we actually need to replace that infrastructure has been difficult, so we found this timeline to be an effective method for educating them.

“One of the issues that Oregon is presently dealing with from an engineering point of view is what is called the Cascadia subduction zone, which puts Oregon and Washington State at risk for a 9.0-magnitude earthquake like Japan experienced in 2011. So I think when this display actually gets out in front of the general public in places like the Portland airport, people will get a better idea of how old our infrastructure is and that it needs to be replaced for safety reasons.”

Building on the Past, Engineering the Future

Another aspect of the Oregon Section’s 100th anniversary celebration was a contest to design the official logo of the event. Kelly Kievit, a senior graphic designer at CH2M Hill, won the contest. The winning design not only appeared on the Section’s website, stationery, and all published material, but was also used on the front of the official anniversary t-shirt, which is presently sold on Oregon Section’s website.

“One of our members contacted us and said, ‘Hey, other professions have t-shirts, why don’t we have one,’” recalled Pyrch. “So we thought, we have this great little logo, why not put it on a t-shirt? So now we have these nice anniversary t-shirts for sale that read, ‘Building on the Past, Engineering the Future,’ and those have been pretty popular, too.”

But work on the 100th anniversary is only beginning. Pyrch and the rest of the committee are putting final touches on the timeline display before it begins its travels throughout the state later this summer.

“It was a big, huge effort,” concluded Pyrch. “But it was definitely worth it.”

Next month, learn how ASCE’s Maryland Section is celebrating its centennial.