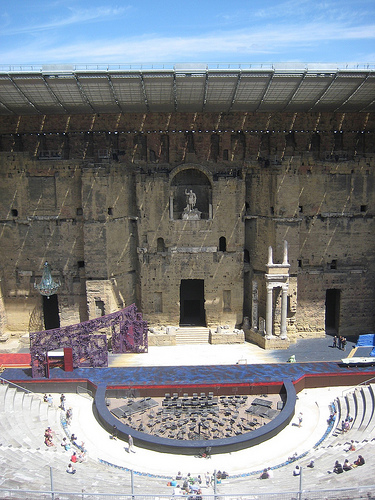 The city of Orange is home to the most complete Roman theater in all of Europe. In fact, only two other Roman theaters in the world can boast of having a similarly preserved stage wall – the backdrop for any production performed on stage. The theater of Orange miraculously avoided destruction by a series of foes, including: the Christians who frequently destroyed any symbol of Roman paganism, the Visegoths rampaging through the Western Empire, and Mother Nature.

I’m continually amazed that these Roman edifices are still used for their original purposes 2000 years later. During my stay in France, I attended a musical performance by the French National Orchestra. We heard Moussorgski’s Pictures at an Exposition, a Rachmaninov piano concerto and a selection from Tchaikovski’s 1812 overture. To this day, the acoustics are incredible. However, the current condition of the theater is the result of continuous renovation that began in the late 19th century. The latest addition is a modern glass and steel roof over the stage. In antiquity, a wooden enclosure would have cantilevered over the stage. Long sheets of linen would also be draped across the entire semi-circular seating bowl. These restoration efforts attempt to recreate for theater patrons the experience shared by the Romans. The events currently hosted by the theater differ significantly from those that would have been most popular during the golden years of the Empire. Mime would have been most prevalent in the second century A.D. Contrary to our definition of the art form, some dialogue was permitted, but the shows were mostly about spectacle: elaborate costumes, “special effects,” action and slapstick comedy. The shows became increasingly outrageous until degrading into pornography. At which point, the Emperor Justinian, whose wife had been an actress, banned mime productions.

The degradation of theater morality is especially ironic, because early Roman leaders were fearful that institutionalized leisure would make the populous lazy and unruly. They partially attributed the Greek’s love of theater to the downfall of Hellenic Empire. For several centuries, Roman theater productions were only permitted to be performed on temporary stages with no seating for guests.

Eventually, the Roman Emperors realized that theater provided a means of indoctrinating conquered peoples into Roman culture and distracting them from thoughts of revolt. It’s highly symbolic that a sculpture of the Emperor looms large in a niche directly over the center of the stage. Within 100 years of the defeat of the Gauls, the residents of Orange had almost entirely accepted Roman language, culture and governance.

The Roman culture and technical achievements would have been highly attractive to many indigenous populations. That is in part why the Pax Romana lasted as long as it did. It also gives some historic perspective to the fear of native cultures in the US and elsewhere that the American Consumer culture will overwhelm local customs.

The technical achievement of constructing the Theater of Orange is no less impressive than today’s architectural significant opera houses. However, the theater’s cultural function is more reminiscent of our military’s goal to win the hearts and minds of the people in whose countries we wage war. The old adage that history repeats itself rings true after a visit to Orange’s ancient theater.

You can read about more of my ongoing adventures abroad at http://mistralwriter.blogspot.com