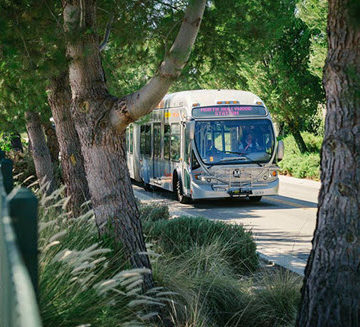 The Orange Line in Los Angeles was ahead of its time in terms of sustainability features. PHOTO: Cris Liban

The challenge of building a system of sustainable infrastructure is a dense one, a diverse blend of considerations and stakeholders.

ASCE Fellow Cris Liban, D.Env., P.E., ENV SP, the Los Angeles Metro’s executive officer for Environmental Compliance and Sustainability Program Management, is well versed on just about all of it.

A featured speaker at the upcoming ASCE International Conference on Sustainable Infrastructure (Oct. 26-28 in Brooklyn), Liban talked with ASCE News about a variety of sustainability subjects, his work in Los Angeles, and finding the balance between economic and social concerns.

“We have a great opportunity to transform our region through the $120 billion initiative we’ve been approved for. We’re looking at this as our opportunity to not only put something in the ground or expand our system, but make sure that the vulnerable of our population, our transit-dependent population, are served well in the evolving context of climate. …

“The reality is a lot of our folks are going to be living in a higher heat base or maybe in more flood-prone areas in the future. So there’s an opportunity there to prepare for that and allow for design and construction of infrastructure to mitigate those particular impacts.”

On being aware of the necessary balancing act

“How do you balance the value of sustainability given the fact that you have all of these folks working on the same infrastructure and trying to fulfill their own goals?

“We’re in an era of competing interests. You have an owner, like myself, of a government entity that’s trying to be a good steward of public investment. You also have policymakers who are either politicians or appointees of politicians. They’re trying to advance the goals and aspirations of the people who put them in those positions. And at the same time you have the private industry, who for better or worse are simply trying to eke out a living. They’re trying to make a profit.

“There is a balancing act among all those competing interests, and the value of sustainability is front and center of that conversation.”

On civil engineers driving the conversation

“While civil engineers have a good sense of what can and should be done, there still is this missing link, if you may, and I’ve seen this in many of my colleagues, including myself many years ago. We tend to be either not too keen on social issues or not too keen on the soft skills to proactively get people engaged with us in technical conversations. And a lot of us – for better or worse – are introverts, and we really just want to do our own thing.

“I think civil engineers play a vital role in allowing those different entities to talk to one another and really explain what sustainability is, especially to policymakers.”

On discovering what works

“In particular we have a project called the Orange Line – it’s a transit project in the East San Fernando Valley. We put in water features even before people were advocating for low-impact development features in projects. And we did that initially simply because the contractor under the design-build contracting mechanism was trying to optimize his profit.

“The preliminary design was to put in curb and gutter as well as putting inlets into the storm drain. That’s fine, but concrete and all that infrastructure costs a lot of money. The contractor suggested adding much more landscaping to infiltrate stormwater, simply to save money. But people now, 12 years later, look back on that project and say, ‘Man, you guys are geniuses for putting in these types of strategies because this is what we need now in our infrastructure.’

“One tends to discover what works, right? It was the collaboration between what can and should be done within the context of the funding we have.”

On the importance of connecting to people

“There are NGOs [nongovernmental organizations] and other folks out there who are saying, ‘Let’s go green! Let’s do all of these things for the environment! Let’s make infrastructure sustainable!’

“But there’s a disconnect I’ve found in the last few years.

“I go to South L.A., one of the poorest neighborhoods in the nation, and we talk about sustainability and how to become a resilient community and whatnot. And I get comments from the community saying, ‘You don’t even live here and you’re telling us how to become sustainable and resilient? You don’t even know how we have become sustainable and resilient because people like you have not come here to understand what our issues are.’

“Very harsh words. But that’s the reality of people just trying to survive in those environments.

“And people like myself, who think, ‘I have the solution for making a better world,’ we may not have reached out and understood those communities. So there is that bridge that needs to be built between us and those communities. I think it’s a very important point.”