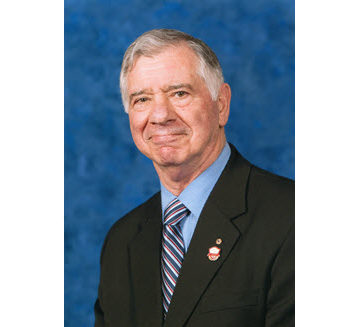 It’s not difficult to see the civil engineering legacy of Harry Poulos.

Poulos, Ph.D., P.E., DSc.Eng., Dist.M.ASCE, is arguably the world’s leading pile engineer. His work and research helped develop new methods for piled raft foundations that have made possible some of the tallest structures in the world, including the tallest, the Burj Khalifa in Dubai.

“You get a certain sense of pride in seeing something in the sky going up 800-plus meters and saying, ‘I had a little bit to do with that,’” Poulos laughed.

“Every time I see the Burj Khalifa I get quite a kick out of it. We had a review role in that project. It was quite a collaborative effort with the designers, Hyder. It’s always nice to be part of a cooperative team.”

He characteristically downplayed his own role, but there’s no overstating his contributions to the field of geotechnical engineering. ASCE has recognized Poulos as the 2017 Outstanding Project And Leaders award winner in design.

Poulos’ career began at the University of Sydney, first as a student and then as an instructor. He steered clear of traditional structural engineering, finding himself more interested in what was happening underneath the structures, in the soil.

“I was intrigued by the uncertainty of it all,” Poulos said. “The fact that no single project was ever the same. There was an element of novelty in every project that really fascinated me.”

His Ph.D. work was in shallow soil foundations, but it was his research on deep soil that changed the industry. Poulos credits his time working with the late Ted Davis as being crucial to his development. Together, Poulos and Davis wrote Elastic Solutions in Soil and Rock Mechanics, published in 1974, and Pile Foundation Analysis and Design in 1980. Both remain a seminal works in pile foundations.

By the 1980s, Poulos’ reputation was such that a lucrative consulting career beckoned. He joined the Coffey Group in 1989, where he served in various leadership positions for the next 26 years.

Beyond the Burj Khalifa, the impressive super-tall structures he has worked on include the Incheon 151 Tower in South Korea, the Emirates Project in Dubai, residential towers in Hong Kong, plus work in Israel, Malaysia, Singapore, Greece, Indonesia, and his home country of Australia.
He continues teaching as an adjunct professor for the Hong Kong University of Science and Technology and professor emeritus at the University of Sydney.

“When I started off my research, I didn’t know quite where it would end up,” Poulos said. “In some ways I sort of stumbled into the area of deep soil foundations. It was almost a lucky accident that I got into it.

“I’ve just tried to enjoy applying theory to practice and finding that you can contribute in some way to real projects.”